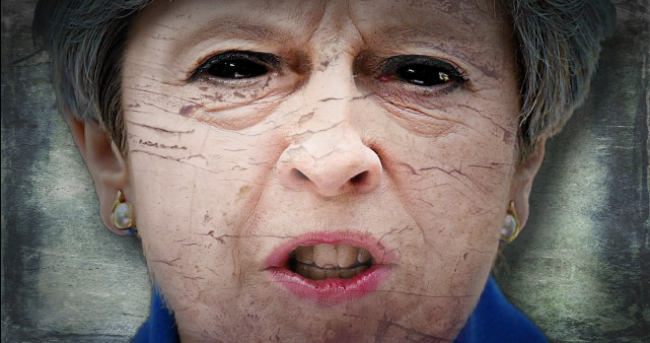 Recently, what the Daily Squib knew a long time ago was confirmed by reports that Theresa May, the person who is meant to be in charge of Brexit, would still vote to remain in the EU if there was another referendum.

This confirmation, much like all the confirmations, has done little to maim this dead barren dog, Theresa May is still PM, she is still in charge of Brexit, and she is still out there somewhere in Number 10 Downing Street.

Who is to blame for Theresa May’s instatement as prime minister? The blame must fall not only on the Tories as a party, but the 1922 Committee and Graham Brady who dealt the final blow to Brexit by putting this insipid grey loser in charge.

What has May achieved in Britain since coming to power? Pretty much nothing.

What has May achieved for Brexit? Not only has she capitulated and bowed down to every Brussels demand but she has thrown away pretty much every bargaining chip Britain had left to negotiate with. She has effectively condemned Britain to EU rule indefinitely. In other words she has achieved — nothing.

Apart from putting a staunch radical remainer into the position of Chancellor of the Exchequer, she has marginalised all the Brexiteers in the Cabinet, and alienated Brexiteers out of the Cabinet.

If this country has any fucking balls Theresa May must go, and we must have a real Brexiteer put in her place to finish the job, shut down the Lords remainers, stifle the Tory remainers, and keep the SNP at bay.

Yes, there are names whispered in the corridors of Westminster who are itching to take over the reins, however, the serious danger arises of another General Election being called if May is ousted. At this time, the danger from Corbyn and his allies can not be underestimated, especially when we have Labour voters voting twice for their leader, and getting away with it without prosecution.

Theresa May must go, yes, but looks like we are stuck with this pallid lame duck loser for now, and it looks like Britain will be served another shitty hand with an empty Brexit by name only, delivered by a remainer with an agenda.