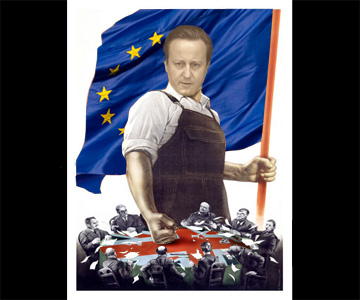 The Remain camp fall into this category, and not only will they stoop to any indignity to mess with Brexit, but they will cheat, lie and moan constantly about their self-inflicted misfortune.

The EU referendum was cross-party, and this means that political parties have been split. It is true to say now that the Conservative party itself is now a party divided between those who respect democracy and those who do not. The Remain side want to be part of an EU that is undemocratic and will ruin Britain forever, and the Leave side are predominantly against the undemocratic EU.

The stalling of the commencement of Brexit proceedings is a direct result of further treachery from David Cameron. Any decent PM would have held on and respected the peoples decision and implemented it, but Cameron, in a fit of rage simply announced his resignation and had a tantrum propelling the UK into further turmoil and costly leadership contests.

Article 50 Must Be Triggered NOW

The man for the job of PM can only be Boris Johnson. Yes, he swings about with his ideology a bit, but at the end of the day, we want someone who respects the Brexit decision, and has a solid foundation in logic, something only an academically sound educated in ancient history politician can do. Jeremy Hunt’s plan to hold another referendum is a serious watering down of Brexit, and should be thwarted with extreme prejudice.

Remainers are essentially traitors. Pure and simple. They cannot be trusted in any circumstance and they know full well that they have betrayed Britain. They know full well what the EU is about and how they were willing to condemn Britain to another undemocratic legislative governing body. This is why we must treat those who were willing to betray this country with great caution in the future, in similar vein to the post-ww2 traitors. The worst thing that could happen now is that the traitors gain the upper hand of the British people. This would be a terrible time for the country.

We must move forward now, at great pace, as this is now a war footing. There has to be an isolation of those who supported Remain. They must be quarantined as their poisonous ideology is a direct threat to Britain’s stability and democracy.