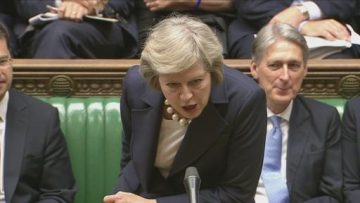 What the fuck has Theresa May gone and done now? She has ordered up a snap election on June 8th. Are you serious Mrs. May? Oh yes she is and what a clever girl she is too.

In one fell swoop she could bury Labour for the next hundred odd years and destroy that Scottish nationalist anti-English maniac, Sturgeon, once and for all.

Of course, it could all go belly up as well. Theresa May may suddenly become really unpopular and Labour could oust Corbyn bringing in a secret super candidate they have been keeping in a dungeon somewhere. This would be the ultimate tragedy, but if the election is to be held in two months time, this leaves little or no chance that the electorate will get to know them, unless they are relatively well known already.

What about the SNP? Well, when Theresa May wins the election, she will have a proper mandate, thus be able to swat away the meddlesome midget from Scotland with more ease. The Scottish referendum that nobody apart from Sturgeon wants could be delayed until 2052 for all it’s worth. By then, hopefully Sturgeon will be dead and no one will give a hoot.

What about Corbyn? Despite not winning many popularity contests amongst his party, he still has a following, and he is not to be underestimated. The communist  and lib dem remainers will no doubt pick this old fart to be their choice in an election, more of a protest vote, but the majority of the country will vote for May, and not some Marxist commie bastard who wants to line people up in the street and have them stripped of all wealth then unceremoniously shot in the back of the head.

Lest we forget other elements that may sway an election. The EU for a start who have infiltrated vast swathes of this country’s institutions like the BBC, could have another Project Fear campaign against May and Brexiteers. Naturally, those who have some understanding of politics will be able to see through the EU fearmongering, however, the EU has a lot of money at their disposal, and they like to throw it around a lot. This is dangerous, because it could sway opinion.

Again, we are at an impasse, this heady Brexit roller coaster ride has indeed brought up the bile, one minute we’re sailing into the open sea, the next, we’re back to square one.

Theresa May has certainly done the courageous thing and called a General Election, albeit if parliament accepts, and if she wins, she will hopefully install a full Brexit cabinet, dumping the Remoaners.

We nearly forgot. BoJo? Could he step into the breach? In times of war, we need a Churchillian type who has the balls to do what is right.

It’s all up in the air once again…Aaaargh!