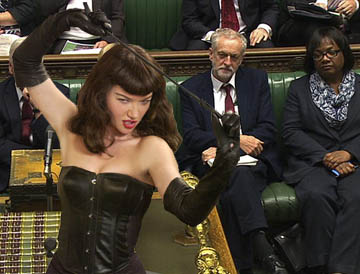 “You get £300 just to turn up at the House of Lords, and naturally the boys down there need somewhere to spend their pennies and pounds.  I acquired quite a few clandestine numbers I tell you. A good whipping is what is needed for some of my Labour ministers, put them in line, for that Article 50 white paper,” Corbyn told the BBC from his chamber.

After the vote is cast for the umpteenth time in the Commons, it will be moved to the lion’s den of Remoaners, the House of Lords. By our count, for every Brexiteer there are thirty socialist commie Lords and Baronesses who are in tow with Brussels through dodgy corrupt monetary means.

Our political commentator, Pascal Mount, was in the House of Lords yesterday gauging the sentiment on the upcoming Article 50 vote.

“I sat in the pit and shouted out loud ‘Brexit For Britain’ and was immediately accosted by a 94-year-old Europhile Baroness who dangled her false teeth over my head. Her heady breath smelled of rotten silage from the farm, her dandruff as thick as the Minnesota snow befuddled my already panicked sensibilities. When a long gelatinous lurgy spindled down from her nose into my mouth I wretched wildly, vomit coming up in spurts, as I could not hold it any more, I projectile vomited my tuna and sweetcorn sandwich onto her white wig.”

No doubt, there will be some friction in the House of Lords, against the will of the people.