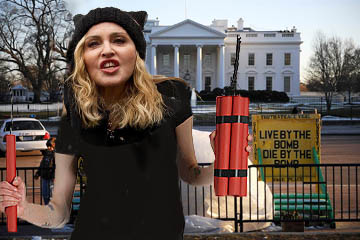 At about 12.00 EST Madonna was spied skulking around Pennsylvania Avenue with what appeared to be some ominous sticks of dynamite.

Agent 9, Secret Service, revealed the full story to waiting news reporters: “We saw Madonna walking up and down the street. I signalled to my fellow agents and spoke in my earpiece, you know like we do all the time. She saw me, then tried to act normal even though she had three sticks of dynamite in her hand. I caught up with her and told her in no uncertain terms to take that dynamite and get the hell away from the White House. Madonna, looked me up and down, grabbed her crotch, then skipped away singing ‘La Isla Bonita’. Thanks to the secret service another tragedy was averted. We deserve a medal or something for our bravery.”

Madonna, who is said to have thought about ‘blowing up the White House’ is said to be distraught after Donald J. Trump became president of the United States of America.