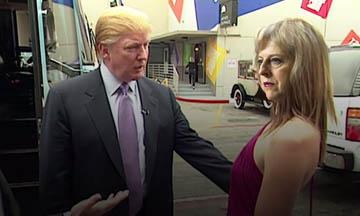 That’s what is good about the Donald, he knows what’s good, and he moves on that like before anyone thinks about moving on it, he’s an opportunities guy, a doer, and this is what the U.S. and U.K. needs right now.

Already in his first five days in office, the Don has repealed Obamacare, started building a wall, and fired half of the State department who were linked to Hillary. That’s no mean feat for a fat guy pushing his seventies.

So, what happens when Theresa May, the British PM comes along to meet the Don?

First off, the internal memos have to spell her name correctly, that took about three goes, then the Don has to figure out how he’s going to speak to this stuck up British slut, because she’s making all the right noises on Brexit but barely delivering.

“Dames come a dime a dozen, you just got to know how to treat the ones who have power. This May broad, I can’t just grab her, for a start, she’s British, they don’t like that kinda thing. So, I gotta shake her hand and smile at her, make it business, that’s what my adviser says.

“No pussy jokes. She’s got a fierce British face with a pointed beak that could poke yer eye out. Nah, I’m not gonna try and fuck her, although screwing the Limeys on some trade deals would be good, I think I’ll treat ’em fair as long as they play on my terms.”

Mrs. May seen coming off the plane certainly looked prime ministerial, there’s something about coming to the land of the free, where no one knows how to make a cuppa, and the wide grid like streets make everything look the same. Compared to tiny old Blighty, America is massive. No doubt, Theresa will be anxious to get to work immediately, and in her newly birthed socialistic tone, she will quietly denounce torture, and commandeer the chauvinistic pig that is the Trump from any manhandling.

“I shall tell him to put it away. If he takes it out, or tries to grab a handful, I shall politely remove his hand from my nether regions and change the subject to Russian relations or EU matters,” May politely reveals once touching down.

As the news will no doubt filter out later on in the day, everything will go swimmingly and there will be a new special relationship birthed. The return of Churchill’s bust to the White House, was the beginning of the relationship, after eight long years of horrid anti-British Obama rule.

Yes, it will be like Maggie and Reagan all over again. Trump and May, will frolic in the aisles as they seal the fate of the evil EU once and for all.