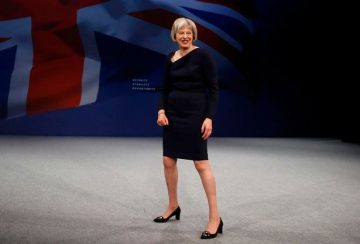 With all her wishy washy claims, Theresa May is a duplicitous grey witch in kitten heels stirring an unholy cauldron of lies, false promises and downright bollocks.

Westminster insiders only know too well what the plan is: “They had the people’s vote but the people do not count. Why do you think they brought in Theresa May and that shister Philip Hammond? There will not be a Brexit while they’re in charge because their governmental power supercedes any Brexiteer in the government. We all know the hand of Peter Mandelson is behind all this. Yes, the Dark Lord himself. He is the one at the helm of the table whispering in May’s ear. They will delay and delay..”

The fight is not over. The Remainers are staunch communists who do not take votes as done deals. The EU is a Marxist entity and so are the supporters of the EU. They do not believe in freedom from totalitarian rule, and this is why they have taken over the government and hijacked the Brexit vote.

We must do something fast, we must take back the reins from these liars, these vagabonds and traitorous deceivers; these turncoats who have no bond of honour or honesty between them. They are the ultimate enemy, because they are the enemy within, a far more dangerous adversary than the politburo and apparatchiks of the EU itself.