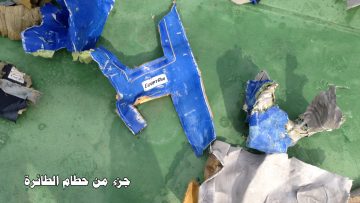 Lifting off from Charles De Gaulle airport on 19 May 2016,  EgyptAir MS804 disappeared off the radar when it suddenly dropped from 37,000 feet cruise altitude.

No one knows what happened, and the French seem to be keeping the details of any searches or black box results  very quiet. The Egyptians on the other hand point towards a terrorist attack, which is the natural logical hypothesis considering the planes altitude when it exploded.

This begs the question, is it safe to fly from Charles De Gaulle airport in Paris, or any French airport for that matter?

There is a definite reason why the French government is keeping this midair incident very hush hush, because if it comes to light that there is lax security at French Schengen zone airports, it will damage the already fragile tourist trade in France which is crucial to its ailing economy.

No one seems to care really and it’s all very quiet..ho hum. Maybe they’re hoping it’s all forgotten.