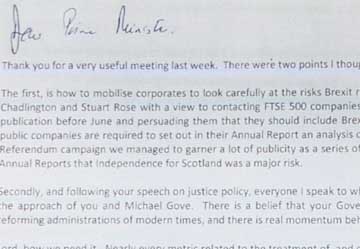 Commenting on the leaked letter from the head of Serco to David Cameron, Michael Geoghegan (ex CEO of HSBC) said:

‘It’s laughable, and very telling, that No10 won’t comment on this correspondence.

‘The reality is that the whole re-negotiation of the U.K relationship with Europe – on which this government won the general election – is beginning to show all the hallmarks of a complete sham.

‘All of Europe knows it, and for the Prime Minister to continue to pretend otherwise runs the risk that the British People will lose confidence in the integrity of this government. I know from my time in the city that there is extreme pressure from the establishment to stay quiet on these occasions – but there is a limit.

‘The reality is the the CEOs of the banks know all too well that the weakness of Sterling has nothing to do with Brexit and all to do with the financial markets lack of confidence in investing in UK based on the Government’s track record to date.The Governor may well be right, interests rates may well go up but not because of Brexit but because as the Governor has said before UK relies on foreigners to fund its ever increasing debts and they already don’t like the trends they are seeing in the economy and they certainly won’t like now the slightest whiff of duplicity. For this reason alone it is vital that the Prime Minister comes completely clean and explains whether he did or did not negotiate in the true negotiating commitments that he got elected on.’