Commenting on the publication of the latest UK Labour Market statistics by the Office for National Statistics (ONS), Iain Duncan Smith MP said:

‘Our labour market is thriving, but it’s notable that more than three quarters of the rise in employment over the last year has come from people born abroad.

‘The truth is that it is Brits on low pay – and those out of work – who feel the consequences of uncontrolled migration. They are forced to compete with millions of people from abroad for jobs, and they suffer downward pressure on their wages.

‘The only way to take back control of our borders, economy and democracy is to Vote Leave on 23 June. That way we can have a fair migration policy that allows us to bring in the skills we need while investing in home-grown talent. A Vote to Leave also means we can take back control of the £350 million we hand to Brussels every week, and spend it on our priorities instead.’

The number of EU nationals working in the UK has increased by 224,001 in the last year alone, the equivalent of a city the size of Portsmouth. 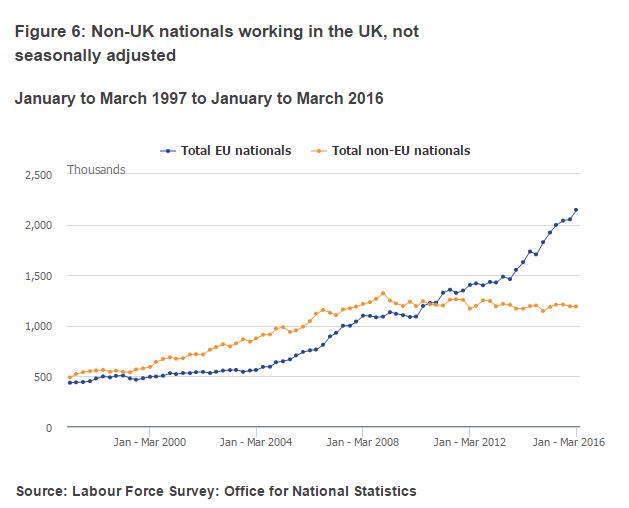 Most new jobs in the last year went to EU nationals. The ONS explicitly states this is linked to the EU accessions.

Unemployment and the claimant count are falling: the Government’s claims about the impact of the referendum are falling apart.