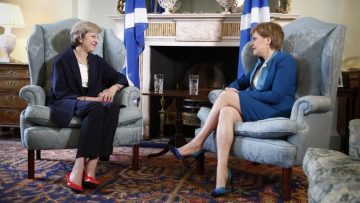 It only took a few days for the ineffectual Theresa May to go and hand SNP leader Nicola Sturgeon a major bargaining chip against Brexit.

What May has done is she has effectively handed over the onus for Brexit to 62% of Scots, ignoring the majority of the United Kingdom.

All the hard work was thus for absolutely nothing and the majority of the UK is being ignored for the likes of Scotland, a moribund economically morose sector of Britain.

Scotland has no mandate, but Theresa May has already shown her cards, and cannot be trusted as she is working for the Remain side.

Mrs May is putting the wishes of the majority of people who voted for Brexit second to those of Scottish nationalists and this is a shameful betrayal of the will of the people.

Why did Theresa May set up a Brexit department if she is now handing over the power to trigger Article 50 to Nicola Sturgeon?

As far as we can see there will not be a Brexit as the Scots will stall for years.

Thank you Theresa May. You’re about as useful as Anne Frank’s drum kit.