Police spokesmen are currently silent as to the details of the shooting, and this is for a very good reason, they have been ordered to stand down from Washington.

Whether black officers die in the crossfire is of no consequence to the black shooters, because in their eyes, any black person working for the police has compromised their standing. This is the sort of skewed thought process that is the modus operandi of these attackers.

When Obama speaks he blames the police, therefore this gives the attackers carte blanche to commit as many crimes as they want. 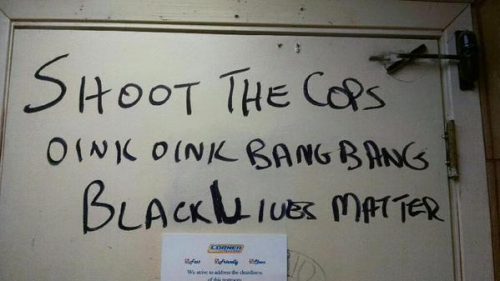 Baton Rouge’s significance lies in the recent death at the hands of two policemen of a multiple felon, Alton Sterling.

One must first understand the agenda at play here, we are at a cross roads within the global forum. Destabilisation of populations within nations either through unfettered mass migration or through racial hatred is a technique utilised for millennia to encourage change.

To achieve change within global sectors, the old must be broken down, and the new introduced. It is necessary for change to occur that there is some destruction, but this is put down as collateral damage to achieve the higher global goal.

This is why we have hierarchy engineers like George Soros, given free rein over the proceedings, and in Europe, Angela Merkel to spearhead the singular agenda. Soros is funding groups like Black Lives Matter for a very good reason, and there is no doubt that president Obama is fully behind his coercive approach to Change.

“Some even believe [the Rockefellers] are part of a secret cabal working against the best interests of the United States, characterising my family and me as ‘internationalists’ conspiring with others around the world to build a more integrated global political and economic structure – one world, if you will. If that’s the charge, I stand guilty, and I’m proud of it.”

Obama promised Americans Change when he first came onto the scene seemingly out of nowhere, and he still has time to deliver. Whether martial law is introduced is another matter, but for Obama that would be an ideal turn of events, as he could continue his program of Change.

The tragic deaths of serving policemen and women is a direct result of Change in America, and the president applauds their sacrifice in the process of change.

Obama loves this, he is enjoying every minute of it, and we may see some escalation sooner than later, because America is a seething tinderbox ready to go off at any moment. The fuse has finally been lit but there may still be a few more weeks or months before the real game begins.