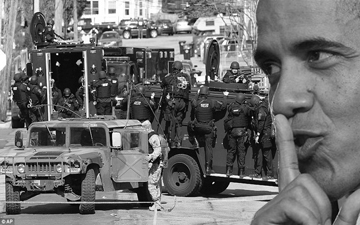 To understand what would happen under a martial law situation, let’s take a look at the Katrina disaster.

Although Katrina was a natural disaster, the response was treated like martial law. The law enforcement troops were going house to house and confiscating firearms from all households. Those who held out, or responded with violence were simply neutralised.

It is safe to say the same would occur if martial law were instated in the United States today. Although the constitution of the United States has a second amendment protecting the ownership of firearms, this ruling under martial law falls into a grey area of legality, and in a time of extreme stress, street violence and civil unrest, one of the first priorities would be to relinquish the armaments from the general populace so that peace could be restored.

It is to this end that we find ourselves in 2016, in a position of extreme gun violence being meted out onto law enforcement service personnel by rogue citizens.

If there is an escalation, for example all 50 states see cop shootings, and there is an increase in general violence, Obama could easily cite a state of emergency and instate martial law then go for the guns.

Martial Law in the United States would include:

Once martial law is in place, Obama would also have to suspend the general election of 2016, and he would benefit from a third term in office.

This falls in line with a 1961 document calling for all worldwide arms to be handed in:

The revolutionary development of modern weapons within a world divided by serious ideological differences has produced a crisis in human history. In order to overcome the danger of nuclear war now confronting mankind, the United States has introduced at the Sixteenth General Assembly of the United Nations a Program for General and Complete Disarmament in a Peaceful World.

Americans must get ready for martial law to occur as the augurs do not bode well for the future.