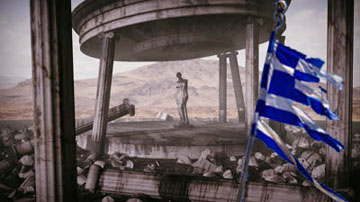 Greece is set to fail completion of a first progress report, or evaluation, of the economy that has been drawn out for the past nine months and has stalled over lender disagreement.

The Institutions (formerly ‘Troika’) are concerned that the Greeks refuse to overhaul their lucrative pension schemes, and generous pay packets.

Trying to reform a profligate country that spent 350 billion euros in EU loans in less than two years is going to be hard work.

In a leaked document, the IMF is threatening to pull out of another much needed loan to Greece, and compounded with additional eurozone pressures this could mean a final default for Greece. Technically, Greece has already defaulted, but it has been worded in other terms.

The recent Wikileaks publication involves the top two IMF officials in charge of managing the Greek debt crisis – Poul Thomsen, the head of the IMF’s European Department, and Delia Velkouleskou, the IMF Mission Chief for Greece.

The IMF anticipates a Greek default coinciding with the United Kingdom’s referendum on whether it should leave the European Union (‘Brexit’).

What the BSE (Britain Stronger in EU) group are not telling EU referendum voters in the UK is that the Greeks will default one month after the referendum. If Britain is still locked into the failing EU, it will be liable by the ESM (European Stability Mechanism) to pay billions more to the fund to shore up the Greek black hole.

It is exactly a Greek black hole, because trillions of taxpayer funds from other EU members are thrown into it where the money disappears without any trace.

To remove ourselves from this inevitable disaster, Britain must leave the EU on June 23 or we will be liable for the debt of others without any recourse or compensation.

Vote Leave on June 23 or condemn Britain to decades of payments without representation. Every week the UK sends £350 million to Brussels, and we get nothing back. We must change this or our nation will go down the sewer of EU history, flushed violently by the hand of misfortune.