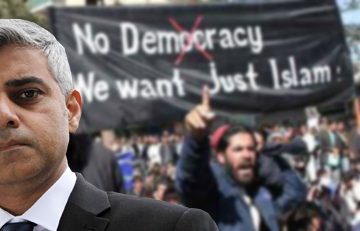 And it’s goodbye from Boris, a fully competent Mayor of London who despite being labelled a buffoon presided over London with capable hands.

Welcome Sadiq Khan, the Labour candidate for Mayor, much like Red Ken he has a thing about Jews, but that’s okay, he’s not only left wing but a Muslim so its acceptable.

Speaking at his inauguration, Khan said: “I would first like to thank Tower Hamlets, without their support, I wouldn’t be here. Also, nice one Barnet. I would like to behead, ahem, I mean thank Zac Goldsmith, because it was his Islamophobic campaign which rallied my troops. Some of us were so angry we voted three or four times each, and it paid off. We will start first thing tomorrow with plans for more mosques across London. I plan to have the muezzins calling for prayers every evening. Cycle lanes? Pah! Those things will be of the past. In their place we shall have separate lanes for men and women.  I would like to conclude this speech with a profound shout of Allahu Akbar!”

Donald Trump, who is said to visit the capital next week, on hearing the news of a Muslim Mayor of London has already called for the city to be nuked.