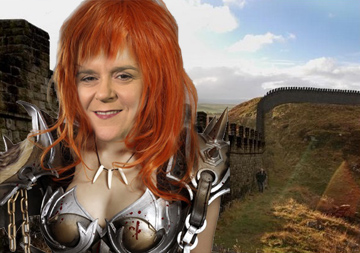 As the Daily Squib accurately predicted in 2012, the Scots would hold Britain to ransom in the event of a succesful Out vote in the upcoming EU Referendum.

Speaking to Andrew Marr on Sunday, the Scottish first minister, who also said a second Scottish independence vote would be “highly likely” in the event of a leave vote, said project fear would scare voters into an EU exit that would be bad for the country.

If the English vote Out, the Scots will vote In after their second referendum bringing complete autonomy to Scotland who will then vote to stay in the EU. That would certainly be a divisive catch 22 situation within a divided island. Thanks to the Scots Britain is most certainly fucked.

We also accurately predicted the emergence of an EU army in 2012, and as predicted in 2015, Jean Claude Juncker was calling for an EU army. Something that would be a grotesque misuse of European powers as well as a major defeat for British sovereignty.

We leave you with words from the founder of the European Union, Jean Monnet, who said this on 30 April 1952:

“Europe’s nations should be guided towards the super-state without their people understanding what is happening. This can be accomplished by successive steps each disguised as having an economic purpose, but which will eventually and irreversibly lead to federation.”