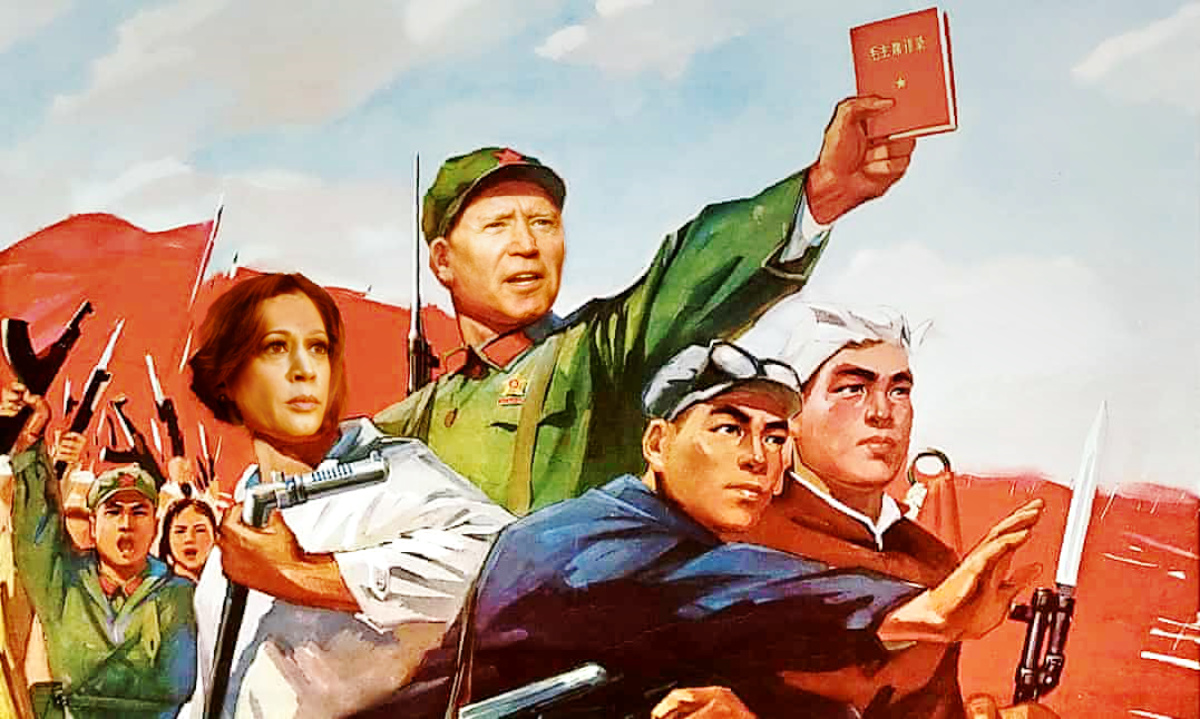 When you have two presidents of the United States trying to rule at the same time, strange things happen. On one end, you have a guy who is a serious national security concern, and has evidently been compromised by the Chinese Communist Party, and on the other hand, you have an American Patriot who puts his country and people first, fighting against the multiple enemies at the gates. It’s up to you to name the two fellas yourself.

In this respect, it is not odd in any way that Democrat candidate, Joe Biden and his Marxist henchwoman, Kamala Harris are putting forward a new plan for the American educational system, which will be also pushed by Facebook’s Mark Zuckerberg and other oligarchical social media/search companies.

“All schools will be required by law to teach Mandarin Chinese, seeing as it is the main language spoken in mainland China.

“Children from kindergarten will also be taught the value of Maoism, and the teachings of Confucius. We will also teach children written Mandarin as well as the spoken language.

After the enemies with guns have been wiped out, there will still be enemies without guns; they are bound to struggle desperately against us, and we must never regard these enemies lightly. If we do nor now raise and understand the problem in this way, we shall commit the gravest mistakes.

Report to the Second Plenary Session of the Seventh Central Committee of the Communist Party of China” (March 5, 1949), Selected Works, Vol. IV, p. 364

“After many decades of demoralization, modern youth today are well schooled in Marxist values as witnessed with BLM and ANTIFA, however we must move many steps ahead to incorporate full educational integration into Chinese Communist Culture and its multiple benefits. Not only will learning Chinese be a precursor for welcoming our Chinese Comrades into our country when the time comes, but we must also engender conformity to all totalitarian control, as well as the decrying of freedom and democracy.

The socialist system will eventually replace the capitalist system; this is an objective law independent of man’s will. However much the reactionaries try to hold back the wheel of history, eventually revolution will take place and will inevitably triumph.

“Speech at the Meeting of the Supreme Soviet of the USSR in Celebration of the 40th Anniversary of the Great October Socialist Revolution” (November 6, 1957).

“There is no greater threat to the Democrat Socialist Party of Sino-America than the American Constitution, as well as American patriotism which we deem as fascism. Our children will only be taught revisionist history and will be shown how American capitalism and democracy are wrong. School curriculums will concentrate on the teachings of Chairman Mao and Marxist ideology, taught directly in the Chinese language to add an extra integrative form of indoctrination.

“American values of the Founding Fathers are evil fascist lies that must be quashed. Especially the right to bear arms which will be quashed, and all arms banned eventually. The American Constitution will be erased from all schools, as well as any reference to Christianity or God. Fuck America!”

What kind of spirit is this that makes a foreigner selflessly adopt the cause of the Chinese people’s liberation as his own? It is the spirit of internationalism, the spirit of communism, from which every Chinese Communist must learn…. We must unite with the proletariat of all the capitalist countries, with the proletariat of Japan, Britain, the United States, Germany, Italy and all other capitalist countries, before it is possible to overthrow imperialism, to liberate our nation and people, and to liberate the other nations and peoples of the world. This is our internationalism, the internationalism with which we oppose both narrow nationalism and narrow patriotism.