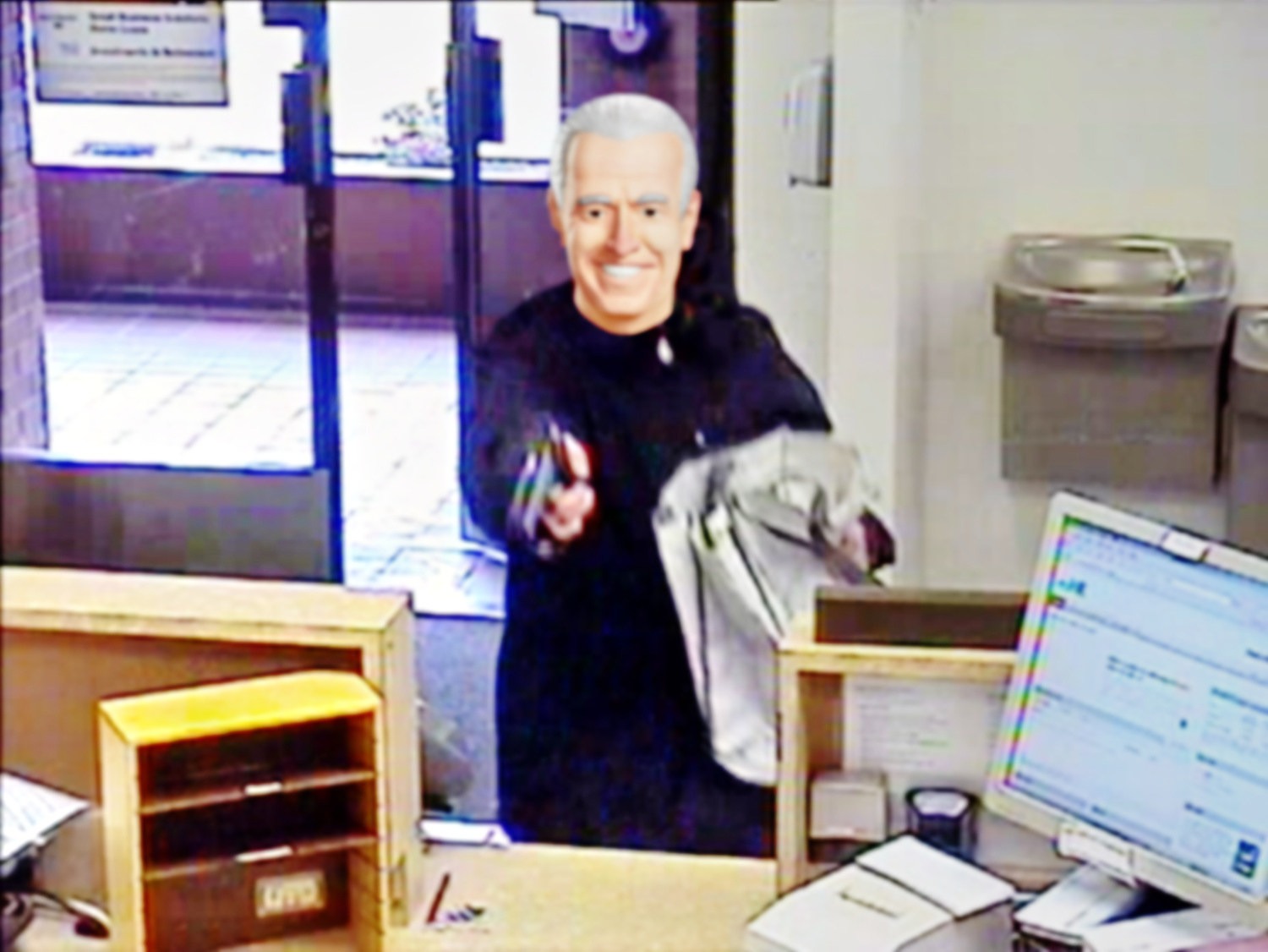 According to an investigation by a team of criminologists in America, over 154 bank robberies, armed robberies and violent assaults including rape have occurred this month in multiple Democrat states with criminals wearing Joe Biden masks, simply because if caught they are allowed to go free.

One Los Angeles bank robber wearing a Joe Biden mask cleaned out a branch of Bank of America and walked away with $14 million even though the police caught the robber exiting the bank.

“I was walking out the bank with a trolley full of money, like $14 million, when the cops stopped me. They said the usual stuff, like ‘freeze motherfucker’ and all that, but then they realised I was wearing a Joe Biden mask, I got a free pass to commit any crime I want without repercussions. The officer in charge even helped me push the trolley of money to the van, and I drove off,” the robber revealed from his luxury condo in Hawaii.

Because of Joe Biden, robberies are also not reported by the Democrat Party controlled press. CNN for example completely ignored the various robberies and rapes committed by criminals wearing Joe Biden masks, instead choosing to run a story on how President Trump should be thrown out of the White House before being arrested and jailed for life.

As for the American judicial system, that is as corrupt as Joe Biden himself. Multiple cases of Biden mask wearing criminals are told to walk out of the courts as blatant photographic and video evidence is ignored completely and the cases never go to court.

In Chicago, a Joe Biden masked rapist who went on the rampage in the city for two months raping multiple women and children was caught but given a reprieve by the chief prosecutor after it was revealed he was wearing a Joe Biden mask.

There were over thirty armed robberies in Pennsylvania this month, yet not a single arrest, because the robbers all wore Joe Biden masks during their crime sprees.

“We went into the Apple store wearing Joe Biden masks, whacked a few people around, and cleaned the place out of merchandise. The cops came, and when they saw our masks, they escorted us out, and even helped us carry some of the larger computers. We even had one cop run back to the store after we forgot one bag of iPhones. He carried it back to our van, and waved us goodbye,” another robber revealed.

The robberies and crimes continue daily with no reporting or arrests.

“Joe Biden can get away with his ‘alleged’ extreme crimes, money laundering, electoral fraud, corruption of officials, tax evasion and High Treason selling out the USA to China, without a single story being reported in the left-wing media, or a single court hearing, or FBI investigation, so is it any surprise that other criminals are watching and using Joe Biden masks to commit multiple crimes, and get away with each one? Joe Biden, is a passport to crime without repercussion, and this is why so many are following in his example,” another criminal revealed as he cleaned out the fourth jewellery shop of the day.

Thanks to Joe Biden, it is now okay to commit crime without any repercussions or jail time in America. Have fun criminals, and don’t forget to thank Crooked Joe for your incredible long run.