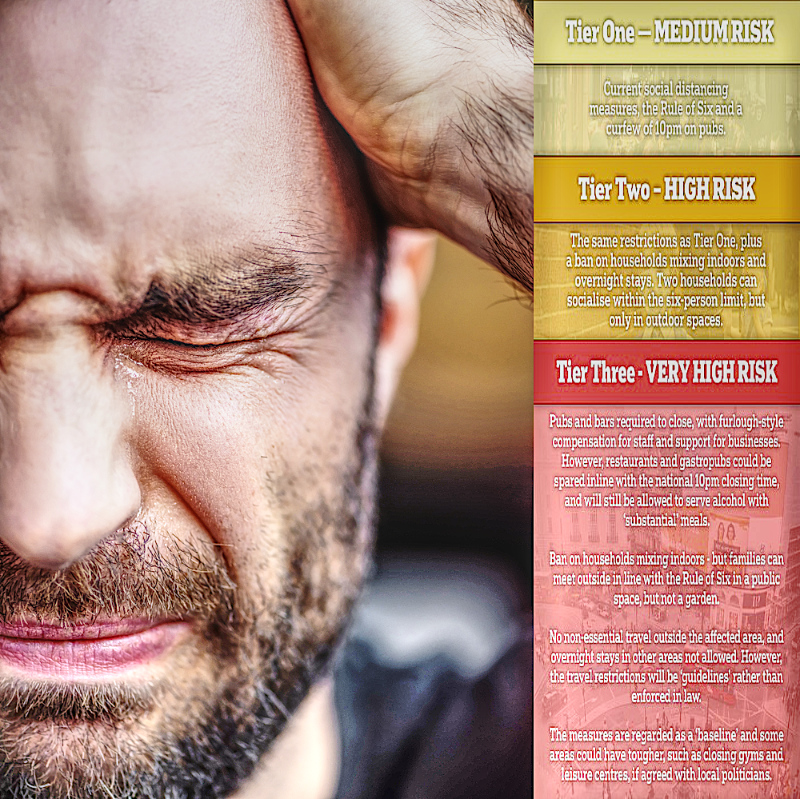 Do lockdowns work? Not for certain businesses they don’t and that’s why many people now have tiers in their eyes from all the tiers of lockdown rules manifesting everywhere, especially up north.

The grimness of the whole tier system is a sign that the government is basically flailing in the dark when it comes to preventing the spread of the dastardly virus.

Advice from one expert can always differ from another, and the advice coming into Number 10 is obviously conflicting, causing unnecessary chaos.

The fact is, humans will have to change to cope with this virus. The Covid-19 virus will continue to infect humans for decades, because it is nigh on impossible to create a valid vaccine for something that creates antibodies only for a few weeks. People can thus be re-infected as many times as they come into contact with the airborne killer. You may not die the first time around, but maybe the fourth or fifth time, the viral load increases, and boom you’re on a ventilator.

Society must change, for example in Britain, many people put boozing in pubs above catching a deadly virus and dying. That is the mindset of millions of people in the UK, and because of this mindset, many will eventually die from the virus, sooner or later.

Shops and businesses will eventually fail and the old system of jobs will have to adapt to the changes. Replacing the old systems was never going to be easy, and it will take time, but eventually a form of adaptation occurs, and is accepted.

Jobs, whole industries will disappear, much like happened during the Industrial Revolution, as technology superseded the old ways. The era of AI, robotics and automation are practically upon us, and the virus is a clear opportunity for the controllers to bring in this new era of human technique.

There is no doubt there will be many disenchanted people, however they will be given two options – adapt or die. Those who do adapt to the new landscape and embrace technology will move forward with the wave, those who do not will become extinct.

Self-sufficiency of course is the key to survival in any situation; to be off-grid, to utilise solar and wind energy, to harvest your rainwater, to grow your own food and manufacture your own tools. Survival in isolation is now the metre to success, especially with a raging virus carried by humans everywhere. In the past, isolation was considered as dangerous, today it is considered as essential for survival.

From all these points of reference, China is always watching, it has unleashed this virus onto the West, and the rest of the earth, but it is patient, because it knows that the economic damage will be vast, and the CCP is waiting like a vulture to swoop down and pick the meat off the bones once the worst of the damage is done.

The Chinese are simply preparing the field before they walk in, and to weaken the enemy is the best option, as they are doing now. Who is to say that Covid-19 was not just a taster? The Chinese scientists may come up with an even more devilish concoction that deals even more damage than their first attempt.

“The supreme art of war is to subdue the enemy without fighting.”

“Supreme excellence consists of breaking the enemy’s resistance without fighting.”