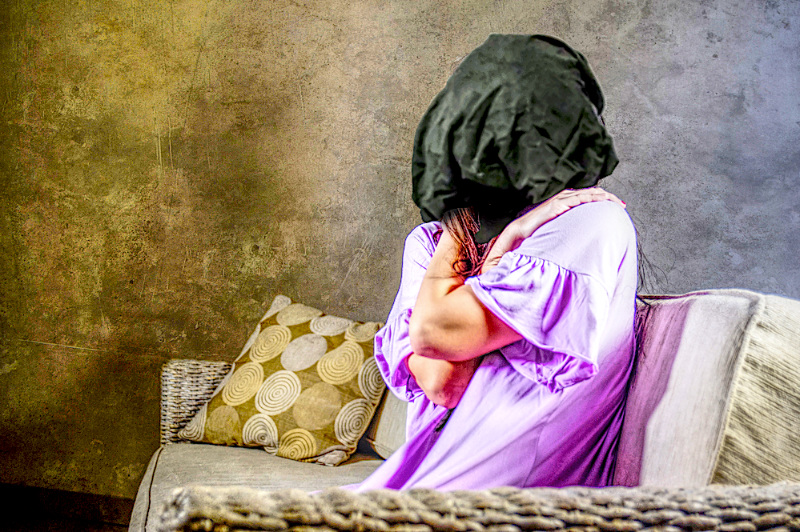 A San Francisco female activist who is in a perpetual state of being triggered, has had to resort to wearing a black hood over her head and earplugs 24 hours a day. She is fed liquid through a tube, because some foods or recipes could be seen as cultural-appropriation.

Wendy Almarsten, 23, now lives in a permanent ‘safe space’ and rarely ventures out.

“She sits in a safe space area in her apartment with a hood on her head, and ear plugs. We cannot say anything to her because if we say any word, it may trigger her depending on what she is thinking of at any time. As her carer, I am funded by Black Lives Matter to look after her, so she survives her ordeal,” Frederica Pitkin, who is Wendy’s carer told the San Francisco Chronicle, Friday.

Things got bad a few weeks ago, when the BLM #MeToo activist, was watching TV, and was immediately triggered as she watched a documentary about chimpanzees in the wild. It seemed, wherever she looked, on the internet, walking down the street, or talking to someone, she would be triggered, and start preaching about her Marxist dreams for America, feminism, Black Lives Matter, and the transgender queer indoctrination agenda.

When Wendy finally was taken to a psychiatrist, she beat him over the head with a bust of famous psychiatric innovator Freud. It seems that Sigmund Freud was a racist in her eyes, and that he also was a misogynistic anti-feminist piece of shit.

Taking Wendy to a regular doctor did not help, when he was doing the check up he described her with the female gender pronoun, and she kicked him in the gonads. According to her hardcore feminist transgender ideologies, that was the wrong thing for the doctor to do, to presume she was female.

Anyway, Wendy is no longer triggered constantly, and just sits in her safe space happy as can be. Some of her friends say that she has never seemed so contented in her life, and hope she carries on being hooded, and her ears blocked till old age.