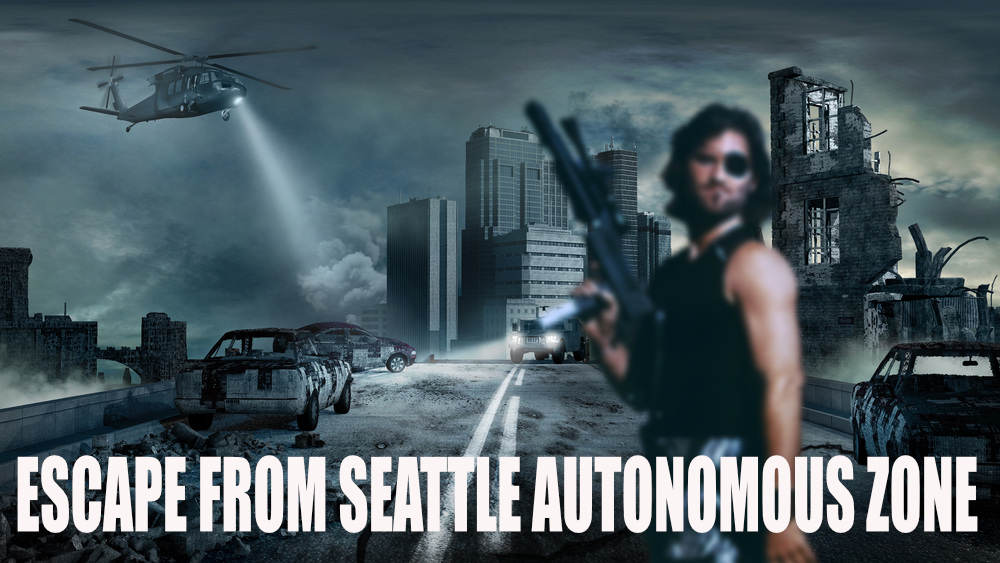 As darkness falls, the sickening sounds of women cry out through the blackness. Either it’s another fight, or another rape, but it’s okay, anything goes in CHAZ or CHOP or whatever they call this stinking fucking dystopian hell.

There is no law, just mob justice. Several times I witness some poor bastard who is accused of stealing something beaten senseless, then left on the ground unconscious, until it is found that the person misplaced their item, and it was all a big mistake.

If you get sick or are injured here, the ambulances don’t venture into the zone. You are fucked and out of luck. I feel like I’m in a fucked up version of Jonestown 2.0.

They said everything was free when I came to Seattle’s first ever autonomous zone, and I relished the thought of living a free, eco-conscious life, but the thugs changed all of that. Every mentally ill, drug addicted and homeless person from the city and a 500-mile radius descended on this place, and the free food all went overnight. Sure, we got some supplies through two days later, but nothing lasts, and I just heard, truckers are now boycotting coming to Seattle so the supply line to the city will be cut. All those promises from that Sith Lord piece of shit and his organisations never played out.

The media paints an idealistic picture of this place, like it’s some kind of Coachella or farmer’s market atmosphere, but they don’t see what goes on behind the scenes. The rapes have increased, and there is violence at the drop of a hat. White people are treated like slaves here, and the white women are expected to service black males or get raped anyway. The interesting point, of course, is many of the white people in the autonomous zone feel white guilt and bow to every oppressive demand from their permanently angry black masters, they just bend over and take it up the ass, without a condom.

We live in tents and have broken into many of the properties within the zone. The first thing people do is take out the spray can and decorate the place marking their territory, like dogs pissing on fire hydrants. There are always fights about who takes over one area, and who lives in another. Sometimes guns are drawn.

Used syringes, litter the grass, so it is important to not walk bare foot and have a torch at night. We must also dodge the human faeces everywhere, and the blood soaked rags.

At night, you see the schizoid freaks stumbling around with machetes threatening everyone, you hear the screams of the women being raped or beaten. Gunshots intermittently ring through the late hours, as the BLM gang fights escalate. Getting a good night’s sleep amongst the chaos is a job on its own. Earplugs don’t work, plus you want to be aware of anything coming into your tent to steal something or worse.

Sanitation wise, a smell of raw excrement, vomit and urine permeates the area, and one has to imbibe a lot of weed just to get rid of the shit smell. This is when I gasp the words “I can’t breathe!” before passing out.

Forget the smell of freshly ground coffee in the morning, instead you wake up in your tent, open the zip and sniff the fresh turds being laid all over the place. Yes, we have porta-potties, but many just shit wherever they want, and wipe their asses on the grass, or any material they can find. Toilet paper is a luxury for the BLM hierarchy, who are living it up in the best spots, with all the stuff they want delivered to them. The rest of us are the slaves.

This was meant to be some sort of Anarcho-Communist utopia, instead, it is a dystopian nightmare filled with uneducated morons who think they know it all and are whacked out on meth, PCP, and crack.

Curiously enough, these are the same people who were constantly chanting ‘no borders, no walls’ to Trump, yet what they have done in the autonomous zone, is build borders and walls, and police these with thugs carrying AR-15s.

Escaping this god-forsaken place is another matter, because I am a senior organiser for water distribution. I have eyes on me all the time, and it’s going to be really hard to get out. All exit points are guarded by BLM thugs, and we even have our own secret Stasi police who go around and interview people to see if they are actually brainwashed in the BLM Soviet ideology.

I will try to escape tomorrow, I think there is one place where I can make my move. I might have to shoot some of the thugs to get out but freedom from this nightmare has a cost..