Gina Miller, an unelected representative of financier George Soros who receives backhander funding through the Open Society Foundation, has attempted to thwart Brexit at every stage, and has been instrumental in trying to stop the will of the people with her High Court Injunctions on the British parliament.

After much wrangling with Gina Miller’s press and security secretary, her management people finally okayed an exclusive interview with the most hated woman in Britain.

Due to the immense number of death threats made to Ms Miller, we were ushered to a secure location somewhere in central London via a blacked out van and were told to put hoods over our heads when exiting the van to the secret location.

After entering the front door, we were allowed to remove the hoods and this is what followed.

The featureless hallway we are in opens up to a secure thick metal door, and the private security officer in front of me bangs the door three times then whispers a password through a small opening. After much clinking and clanking, the door is finally opened. My assistant and I are searched for the fourth time. Then we are led into another room where there are an assortment of old wooden chairs, a sparse light and security camera screens on all sides.

Eventually, after fifteen minutes waiting, Gina Miller opens another door and shakes our hands, the interview is about to start. 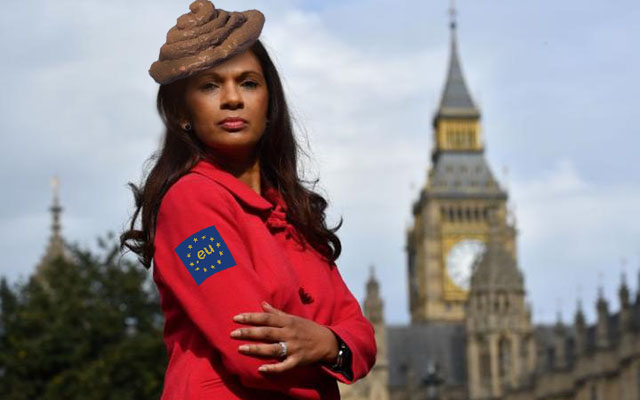 Miller: Thank you for coming.

DS: Thank you for having us interview you.

Miller: Please begin, but if you ask something too sensitive for security reasons I cannot answer.

DS: Ms. Miller, why are you doing this? Many see you as an unelected tool of the EU or other forces trying to thwart the will of the people in a democratic referendum that took place on June 23 2016?

Miller: I believe I am saving Britain by stopping it going out of the EU.

DS: How are you saving Britain from leaving a totalitarian regime run by unelected eurocrats who dictate laws upon Britain and charge obscene amounts to the UK taxpayer for ruling over us?

Miller: The people who help fund my cause do not think like that, they have business interests that would be damaged if Britain became a sovereign nation away from EU slavery.

DS: Ah, the people who fund you. Namely George Soros, the Hungarian financier and the unelected EU Commission?

Miller: Yes, and I have also put up some of my own wealth to stop Brexit from happening. I also have other big names behind my actions, including Tony Blair, Peter Mandelson, George Osborne, the SNP, Nick Clegg and Kenneth Clarke.

DS: Certainly you have a lot of powerful people behind your court proceedings, however don’t you think it has come at a price, especially regarding your safety?

Miller: I may be the most hated woman in Britain today but tomorrow when I stop Brexit, I shall be so hated that I think I will have to move out of Britain and go back to Guyana.

DS: Yes, indeed it is quite interesting to see the level of hatred towards your person. You are certainly very sure of yourself, and that begs the question, you’re originally from Guyana, so why meddle with the English? Should you not let them be the masters of their own destiny after all it is their country and heritage?

Miller: I actually don’t care for the English at all. I am only interested in the rights of EU people who came over to the UK so they could take the jobs of lazy English people and drive their wages down with cheap labour. You see, the EU is a Marxist construct and its modus operandi is to create equality for all citizens, and be led by an unelected hierarchy with vast expense accounts and salaries. Our agenda is the collectivisation of all wealth distributed to everyone on an equal basis, poor EU citizens taking the wealth of rich EU citizens. The rest of the population will eventually be consigned to a communistic equality in poverty after the wealth is distributed from those not within the EU high circle.

DS: I can certainly see that poverty levels in some EU countries like Greece, Romania and Bulgaria are at unprecedented levels, but how will this benefit Britain, as a part of the EU?

Miller: Because the peasants and low-skilled come to the UK, they use the NHS resources, they fill up the schools and use the benefits system to the full. It’s just another way of destroying Britain from the inside, economically and culturally. I already told you I hate the English. I want their culture to be destroyed from the inside, and so do my friends, who are funding my campaigns.

DS: I see what you are doing, and so do many others, you are Britain’s enemy. You and the other Lord and Lady Haw Haws are out to kill off Britain once and for all. Under the EU, it would be designated as a mere zone, to be exploited. This is why many Britons voted to get out, they do not wish to be just a nameless zone in the EU or its cash cow and dictated to by faceless unelected EU technocrats.

Miller: I refute that. Under the EU Britain will adhere to the laws and directives from Brussels which is ultimately ruled by Germany. I believe the Germans are better at organisation than the British. In fact, the EU countries today are part of the Greater German Empire. They were conquered without a single shot being fired, something Hitler could only dream about.

DS: So, you’re saying the EU is essentially the Fourth Reich?

Miller: Yes, and I am an agent who is backed by some very powerful people to stop Britain from escaping this EU communo-fascist bloc led by Germany. I am also backed by British traitors within the country who want the EU to rule over Britain. There are many who support communism and Marxist ideals within Britain today, and there is nothing anyone can do about these traitors who willingly want to sell off the country for a pittance.

DS: There are also some Conservative MPs who support the EU. Are they traitors to Britain by supporting the communist EU bloc?

Miller: Treachery comes in different shades. I would say these Conservative MPs who support the EU and my cause are more economically minded individuals. We pay them vast amounts of money for their support, and for that their allegiance to Britain magically fades away.

DS: And they would be the sort of people who would easily sell their own kids off to medical research facilities in China. Thank you for clearing that one up.

Miller: The EU Army will also strengthen the European Union. They are building a formidable force which will incorporate many military forces into one unit that will be separate of NATO. The EU is preparing for war with Russia, and this is why it is imperative that Britain stays in the EU.

DS: But we don’t want a war with Russia. We also don’t want an EU Army. This is also why many voted out of the EU. It seems like 1939 all over again. We are seeing history repeat itself.

Miller: Well, if Britain leaves the EU, it will not survive a Russian assault or one by the EU Army.

DS: We have NATO and our American allies. We shall see about that.

Miller: Good luck with your little British Empire. It’s over for you. Finished. I’m finished with this stupid interview too. You will never learn. One way or another I will stop Brexit, and no one can stop me. Goodbye! And if you print this interview I will personally get one of my paid thugs to break all your fingers and legs. (Miller storms out of the room and slams the door behind her)

We are roughly escorted out of the premises and taken to our offices. The interview with the most hated woman in Britain, Gina Miller is definitely over.