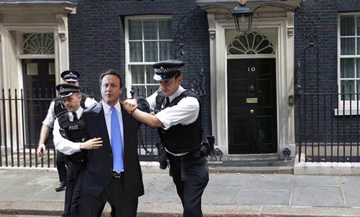 This treasonous fact, seems to be dusted under the carpet, but it is intrinsically true.

The In campaign of the EU Referendum led by the PM is effectively working against Britain’s interests, its security, its sovereignty and ultimately the monarchy.

If Britain stays in the EU, the monarchy may be abolished by the orders of the European Union. Under the EU’s collectivist strategy, much of the land that the current monarchy owns now under the Crown, would be subject to confiscation by the EU and opened up to the public, effectively abolishing thousands of years of British royal heritage.

There are most certainly plans within the EU to halt the British monarchy after Queen Elizabeth II’s reign, and where would this leave the successors of her majesty? Funding to the monarchy within the EU would either be halted or severely cut.

The royal house of Windsor is seen as a major threat to the EU because it still holds some constitutional power, and every law has to be passed ultimately by the Queen. The EU wishes to take away Britain’s sovereignty completely, and David Cameron is pushing for the complete dissolution of the monarchy in the long run.

William Joyce (Lord Haw Haw) was the last person to be hanged for High Treason in 1946, and although capital punishment has been outlawed in Britain since 1965, today the maximum punishment for high treason is a long stretch in prison, since the Crime and Disorder Act of 1998.

If David Cameron loses his bid to commit high treason against the state and the monarchy, he may find himself in prison for a very long time.

It is not just the highest echelons of political office who are thus at risk here, but the people who are vocally calling for Britain to stay In the EU who are also at risk. In the future, they themselves may be targeted as unreliable, as treasonous vermin, and as traitors to Britain. You are being tracked on twitter, on Facebook or wherever you voice your tawdry treasonous opinion, and if the future is Out of the EU, you will be remembered, as will the treasonous members of parliament who chose the side of Britain’s dissolution and surrender to the enemy.

To be hanged, drawn and quartered was the punishment for treason hundreds of years ago, and the four corners of Britain would display the remains of the traitor rotting on spikes, displayed for all to see.