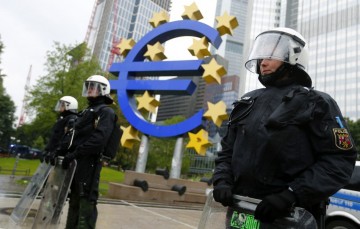 This is why No Deal is the best option for any Brexit team on the cusp of so-called negotiations.

Every day, Brussels comes up with some ridiculous sum that Britain should pay as a penance for daring to leave the authoritarian pseudo-communist Soviet EU state.

£65 billion here, £125 million there, as these ridiculous sums are parried about, this is a sure-fire lesson in why the EU is essentially a racket, a mafia-like regime of thieves who imprison nations and make it almost impossible to leave.

The onus is on voters once again brought into the fray to vote for a strong conservative government to finally break the malaise that has not only entrenched the country but given the unelected communist Eurocrats carte blanche to threaten Britain with ransom bills every other day.

The EU do not negotiate, they utilise delaying tactics, they suddenly adjourn meetings and leave, they do not play on a level playing field, as they continually will move the goal posts until they get their desired outcome. This sort of nefarious dishonest technique employed by the EU, makes negotiation nigh on impossible.

Britain must preserve what it has left and leave the toxic EU with haste, with zero negotiation where blackmail is present. We must not be party to ransom, we must not capitulate or compromise with a state that threatens us on a daily basis.

On June 23, 2016, the historic EU Referendum vote showed an emphatic answer of defiance to 40 years of authoritarian rule by the EU over Britain’s sovereignty, its law, and its ability to control its borders.

We must not dishonour that vote on June 23, as it changed the course of history, where Britain would once again become a self determined country and not a slave to a Sovietised EU totalitarian Union.

There shall be no deal with terrorists, and no deal with the EU, and they can implement as much Project Fear as they want on the populace, we do not negotiate with blackmailers and those who hold us to ransom.

The EU has not only threatened the UK with vast sums of ransom cash but have tried to destabilise British territories like Gibraltar. This form of threat is not only below the belt, but it shows what the EU is, a rogue state, floundering and lashing out.

The message is loud and clear. If the EU is prepared to put aside the threats, blackmail and ransom notes, there could be a deal. If the EU continues with its daily ransom demands, No Deal.