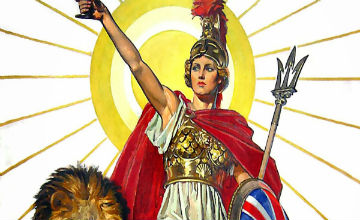 Above the collective sound of Remainers moaning that awful pitiful communist wailing sound, and the vindictive Sturgeon, an English-hating barren midget plotting evil plans, and the EU hierarchy issuing hourly threats of what they will do to Britain — Theresa May has finally triggered Article 50.

What she should have done as soon as she came into office, she has finally done, and wasted countless months on nothing but useless court cases, derailing plots, useless parliamentary votes, and the chance for Scot Sturgeon to regroup and exercise her plans to break-up the United Kingdom.

The fight to free the UK from the totalitarian shackles of the EU are however not over with a simple signing of a piece of paper. There are now more plots to derail the exit process than there were to derail the triggering of Article 50. This impasse, is mainly because Article 50 should have been a Shock and Awe signing quickly after the EU referendum was won.

One thing is certain and that is the UK is not liable for any leaving penalty costs as the EU is stipulating, and it is in fact the EU that owes Britain billions of pounds.

Still governed by thousands of EU laws it will take years to dump the effluent that has crept into the British system so that it can finally govern itself again.

Freedom from slavery and servitude always has a cost, and much like the institutionalised prisoner leaving his cell after forty years in prison, it is going to be hard for the subservient government officials to finally think for themselves without answering to their German and French bosses.

Traitors like Lord Heseltine, Blair, Clegg, Mandelson, Osborne, Cameron, would have happily collaborated with Germany in World War II, and if things had gone their way today would have condemned Britain to become a mere sector in a German-led new EU Reich, a defeat for Britain without a single shot being fired.

The Germans have sought to conquer Britain for many years, through two wars, and through economic/political means through the EU. That third war was fought without guns, but it nevertheless was a war.

Onward, the ship finally sails, the open sea beckons, the horizon is clear. Britain is going global once again…