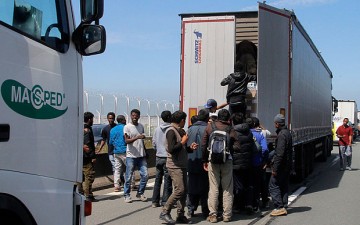 They argue that there is a ‘basic lack of democratic consent for what is taking place. Voters were promised repeatedly at elections that net immigration could be cut to the tens of thousands. This promise is plainly not achievable as long as the UK is a member of the EU and the failure to keep it is corrosive of public trust in politics.’

We all agree that it’s vital everyone is clear about the facts in the EU referendum.

There are real risks in remaining in the EU and every citizen needs to be aware of these in coming to a balanced decision about how to vote on 23 June.

We would be grateful if you could confirm a series of facts about the free movement of people which is a critical element of continued EU membership. Agreement on these facts will enable us all to have a fully informed debate.

We already agree on some basic principles.

But our membership of the EU means we don’t have control.

As you know, this week the Office for National Statistics published migration statistics for 2015. Last year 270,000 people came to this country from the EU. Net migration overall was 184,000. That means we are adding a population the size of Oxford to the UK every year just from EU migration. This puts particular strain on public services.

We are particularly concerned about the impact of free movement in the future on public services. Class sizes will rise and waiting lists will lengthen if we don’t tackle free movement. As the euro crisis continues, more people from Southern Europe will want to escape unemployment and austerity in their countries by coming to the UK. Their arrival will put further strain on schools and hospitals.

Last year, 77,000 jobseekers from the EU came to the UK. It’s Government policy that ‘EU migrants should have a job offer before they come here.’ But the EU did not agree to letting the UK implement that policy during the renegotiation of our membership.

It’s not just the strain on public services which gives rise to cause for concern. We are all committed to improving wages for working people. But continued free movement for jobseekers will place considerable pressure on the wages of low paid British workers in the event of a vote to remain in the EU. This is good for some of the multinationals funding the IN campaign. It is not good for British families struggling to make ends meet.

And the current EU approach to immigration isn’t just bad for us economically, it is also bad in security and humanitarian terms.

There is a direct security concern for all of us because the European Court of Justice can interfere with our ability to deport criminals and others whose presence here is not conducive to the public good. The case of Abu Hamza’s daughter-in-law underlined the way EU institutions fetter our ability to deport convicted criminals.

Perhaps most worrying of all, the EU’s policies are failing in humanitarian terms. The tragic scenes unfolding in the Mediterranean underline how badly the European Union is handling population movements and migration pressures. People smugglers and organised criminals are exploiting this situation and the EU is failing to tackle this trade in human misery.

If we remain in the EU the situation is only likely to get worse. The European Court of Justice can use the Charter of Fundamental Rights to overturn decisions of elected politicians on asylum policy. It is now in charge of how we implement the crucial 1951 UN Convention on Refugees. We need a new approach on refugees but the EU’s institutions stand in the way.

There is also the basic lack of democratic consent for what is taking place. Voters were promised repeatedly at elections that net immigration could be cut to the tens of thousands. This promise is plainly not achievable as long as the UK is a member of the EU and the failure to keep it is corrosive of public trust in politics.

Given the public’s desire for the facts ahead of the referendum, we would like you to confirm the following facts:

A vote to remain is a vote to maintain permanently the EU Treaty principle of ‘free movement of people’.

A vote to remain is a vote to ensure that we must admit economic migrants from the EU, whether or not they have a job offer.

A vote to remain is a vote to affirm the European Court of Justice’s ultimate authority over whether we can remove persons whose presence in the UK is not conducive to the public good – in this and other respects we do not control our borders.

A vote to remain is a vote to leave the European Court of Justice able to use the Charter of Fundamental Rights to strike down decisions of the UK Government and Parliament about asylum and immigration policy.

A vote to remain is a vote for the UK to continue supporting the EU’s failed policies to deal with the tragic crisis in the Mediterranean.

We look forward to your response.

Boris Johnson, Member of Parliament for Uxbridge and South Ruislip