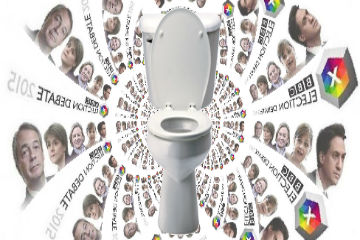 It’s over, and what a mess. Farage is around the back having a post debate ciggie, Miliband is stuffing a bacon sarnie up his flared nostrils after splurging too quickly, the Green candidate is talking gibberish in a corner and the SNP matron is planning the next battle of Bannockburn whilst admiring her hairy forearms.

Cameron and his yellow counterpart have done well to have steered clear of this rancid rigged election debate attended by a leftist baying audience’s circle jerk session assembled in a socialist BBC biscuit factory.

It stands to reason that British elections are on the whole inconsequential and irrelevant when it comes to global power play, as can be witnessed by the placid waning election campaign so far.

Unfortunately, there is only one election that counts to determine the world’s direction and that’s the US election of 2016. The winner of that election; who has already been chosen but will only be announced on election night when the votes are ‘counted’, will determine the route of the globe for the next four years. The Brits really do not determine anything any more, especially as the UK is now just a sector of the EU.

Until then, it is best to let the soggy tissue of the British election theatre play itself out and be unceremoniously flushed down the khasi next month.