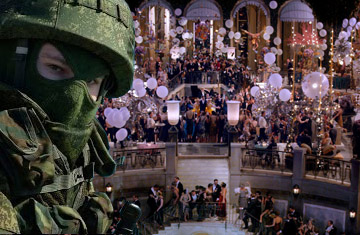 “With debt obligations in excess of $70 trillion in 2012, can the US play economic games with Russia? After all, there is a self sufficiency to the Russians, they are used to hardship and toil, the Americans on the other hand are not used to scrimping and saving, they simply spend and spend even more.

“The cracks will eventually widen as the Russkies dig in, whereas the Yanks, who are addicted to their profligacy and over indulgence in all matters will simply spend more money that they do not have thus digging an even bigger debt hole for themselves.

“There is of course an element of good cop bad cop with the current brinkmanship being displayed, as in reality, Obama and Putin are keen followers of the same Marxist policies. This is simply a game, and since Americans feel they have scattered the contrived Islamic threat some what, there is a hunger to find a new enemy for the plebs to wave their jingoist flags and bay at.

“The economic war has been going on for some time, way before any Ukrainian excursion, however as things escalate, the main target will probably be the dollar.

“By simply putting a spanner in the cogs, Russia could destabilise the dollar initially making it rise to unheard of heights, then slapping it down to nothing. Many countries have been slowly unloading, and the dollar is not safe any more as a world currency. The dollar is key to global stability, but more importantly, it is crucial for Americans, purely as a fiat currency, this is why things are so cheap in the U.S. if that were to go, then the Americans would be paying inflated prices for goods that the rest of the world is forced to pay.

“It is interesting that whenever Obama utters a word, he makes sure he iterates the point that it is the rest of the world against Russia. America is not the ‘rest of the world’ they may think they are, but they are not any more, and it is this arrogance, and insular ignorance which will be their final undoing.”