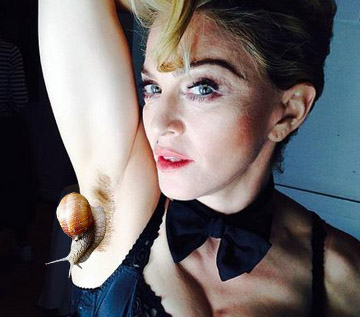 The exquisite taste of escargot nestled in dizzying butter, that has grown under the armpit of  the world’s most famous female pop star is a dream to behold, as it sizzles in a frying pan in one of New York’s most exclusive eateries.

Madonna has been cultivating snails under her arm pits for some time now, she has a penchant for such delicacies, and enjoys the feeling of companionship only a snail can give.

“I love the crunching sound when I lower my arm. These snails feed off my arm pit hair and the little critters that live there. They do tend to grow quite large, possibly due to the extra nutrients I give them,” Madonna said at New York’s premier French restaurant, Chez Salope.

The four Michelin starred restaurant also pays top dollar for the escargot, not only for the star factor of the grande dame of pop, but the sheer size of these bags of slimy puss.

Head chef, Gerard Draino, revealed: “Madonna’s escargot is delightful, they are succulent and have an amazing aroma. Our patrons naturally pay through the nose, and we’re not talking snot, but oodles of cash to eat a Madonna escargot.”