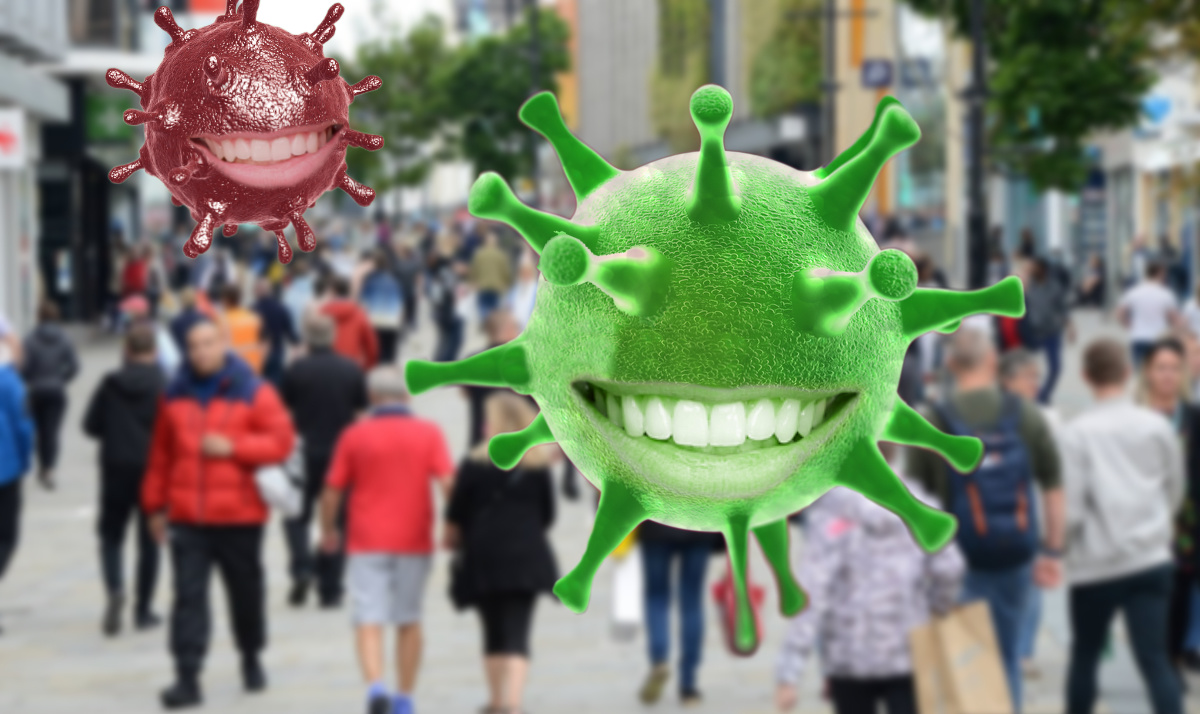 Merry fucking Christmas! Airline stocks drop, the indices drop, and crypto led by Bitcoin is now testing lows bordering on a prolonged bear market, however, what is driving this fear? The WHO is possibly stoking the fright amongst the global population by causing alarm bells to go off concerning the new (B.1.1.529): SARS-CoV-2 Variant, an Africanized bitch motherfucker Botswana virus named Omicron, which sounds more like a software or printer manufacturing company than a deadly fucking virus with so many spike proteins it practically sticks to anything.

Firstly, we must be calm, because panic only causes over-reactions and then poor decisions. If the scientists created a vaccine for the other variants, they are surely looking into Omicron right now. Second, it is imperative that proper N 95 rated masks are worn when in public or in crowded areas, anything else is useless. Thirdly, airborne water droplets can land anywhere on your body, but the eyes are vulnerable, therefore eye protection is a must. Finally, sexual intercourse, especially with multiple partners is dangerous we are sad to say because the virus can be transmitted through bodily fluids, including saliva and semen.

The subject of lockdowns is a sensitive one, but the globe must not lockdown again because the economic damage is too destructive, and would eventually kill off more people than the virus. Killing off people’s livelihoods is no solution to this problem. If humans have to go around in space suits, this is better than any lockdown.

The solution to this virus should not also rest with vaccination but a multi-tiered approach, initially inventing a mask that is not intrusive but effective in stopping transmission. If everyone wore a proper mask that does not allow viral particles through, then the virus would not spread, the key is to find and supply one of these special masks to the entire population, so that each person is equally protected. There are people who do not like wearing masks and these people should be allowed to get infected if they choose, and possibly die if they choose, but they should not be forced to wear a mask if they do not want one. It’s okay, though because as long as others wear masks they will be protected sufficiently from the minority of naysayers. Eventually, non mask wearers will succumb to the new strain and be removed from the equation anyway.

Anyone who denies the Covid virus exists will eventually find out the opposite of their belief, but their scepticism should be respected, it is their choice and their formulation that has led them to this point. Yes, it is good to question things always, however one must take their information from multiple sources otherwise a form of indoctrination occurs. Many vaccine deniers, and covid sceptics only glean propaganda information from a few sources,  and are thus stuck in a sceptical echo chamber that imprisons their views, impoverishing their outlook. Many of these people, much like flat-earthers, should be left to their own devices as nothing one says can sway their viewpoint. Why even waste energy with these people when it can be utilised better trying to solve the problem at hand?

Testing for the virus must be improved. The scientific community needs to find a valid, accurate and fast testing system that will identify who is a carrier and not. Governments must implement the testing facilities with effective logistical proliferation within all population centres.

All educational institutions should adopt mask wearing, because these places are where the super-spreaders lie, with asymptomatic viral loads that are much more potent and virulent than adults. The youth are the primary spreaders of Covid onto the rest of the population, and if there is a particularly nasty viral strain like Omicron, they will sadly be the cause of many adults dying. The clever thing to do would be to shut all educational establishments and continue home learning programs, but unfortunately many people utilise schools as mere holding facilities for their kids so that both parents can work.

We live in a society where money, greed, gluttonous consuming, and material wealth is more important than surviving a global pandemic wracked by an evil viral variant. The economy is more significant than you as a human, even though the economy relies on humans consuming, it seems that this duality is not recognised by the economists, who will do anything to keep everything open. There must not be a lockdown under any circumstance, even when people start dropping dead in the fucking streets.

Just a little thought: This new variant suspiciously came from Botswana, where China is heavily involved with the government utilising its Belt and Road Initiative. Since the Chinese are most certainly culpable for engineering and creating the initial Covid-19 Wuhan strain, it could also be a possibility that their scientists upped their game in engineering this new Omicron strain. Furthermore, as tensions rise between the West and China, the timing is suspicious to say the least of releasing such a virile pathogen into the human population. One would not doubt the extent of evil the Chinese communist regime is capable of committing to win their planned wars. Why not weaken the rest of the populations, seed more chaos and disorder, then clean up the mess militarily with relative ease? Sun Tzu would approve of the tactic.