“He would have to dye his hair black every day in case anyone realised he was actually a ginger haired dictator. I don’t think it would have given him much of an air of authority, and he certainly would have been teased for it, so he got special hair dye which was mixed by unfortunate Jews in concentration camps,” senior archivist, Dr. Gunther Hasseltroffe, told German news agencies.

The secret is finallly out after all these years and Hitler must be turning in his grave, although no one knows where that actually is.

“Only Eva Braun would have known about it. She would have to administer the dye in secrecy every night, but during the last days when the Fuhrer was in his bunker, they nearly ran out and had to use black shoe polish,” Dr. Hasseltroffe, further revealed.

Moshe Rosenberg, 89, was one of the black dye mixers at the Auschwitz concentration camp in 1942.

“The Kommandant would come in and they said we had to make a special dye for a very special man. When the guard was not looking naturally we would urinate and shit in the pot. Maybe some spit. They said they wanted Jews to do it, so we sure as hell gave him a good hair dye. I only learned recently that it was for the Fuhrer and to tell you the truth, I had the biggest smile on my face, Gilda my wife wondered what was up with me. Unfortunately, many Jews died making the dye because if you didn’t mix it fast enough, the Nazi guards would shoot you in the head.”

The course of history could have been changed completely if Hitler had not dyed his hair. No one in their right mind would have taken him seriously and he would have been laughed off the stage in Nuremberg. 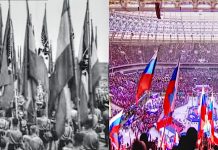 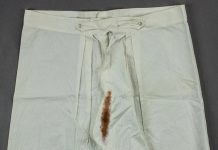