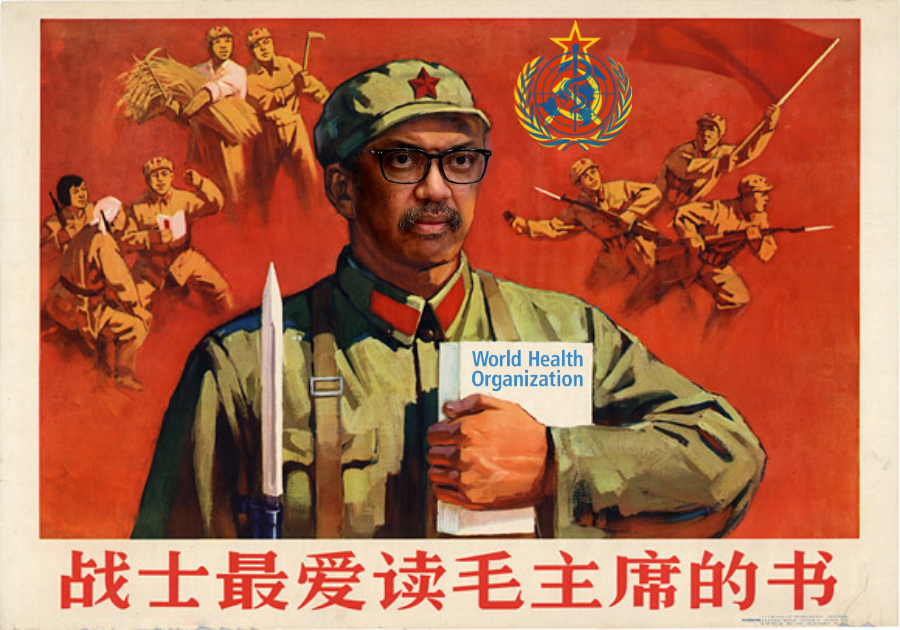 Infiltrating organisations and installing your operatives is a key technique for many global revolutions, and the WHO World Health Organization has been successfully compromised by the Chinese Communist Party and their shoe-in, Ghebreyesus.

Like any clandestine operative, WHO chief, Tedros Adhanom Ghebreyesus has a very dodgy and secret past, and was only installed in the job through heavy lobbying from the Chinese. It was an expensive operation, but it worked.

To listen to Ghebreyesus talk about his Chinese masters is to listen to a master class in brown nosing. The WHO chief has his nose so far up Xi Jinping’s fat arse that he can literally smell and taste the sweetcorn.

Everything Ghebreyesus does is China centric, and he does not conduct any speech without praising the wonderful Chinese, of course being careful never to mention the word Taiwan.

One would have thought the WHO, which is an arm of the United Nations would be unbiased and totally transparent in its stance regarding world affairs, but this is not the case with Ghebreyesus, who blurts out the word ‘China’ after every other word.

The WHO chief’s blatant favouritism is possibly due in part to the bulging brown envelopes the Chinese give him in darkened rooms on an ongoing basis, but most certainly, it is down to the revolutionary communist plan to take over the world, economically, when all other Western nations are bogged down in a coronavirus economical malaise.

Ghebreyesus is a cog in the communist machinery that is poised to make some major moves soon, and he is doing his job very well. It is a shame though, that an institution like the WHO, and the UN, should be sullied by such blatant corruption.