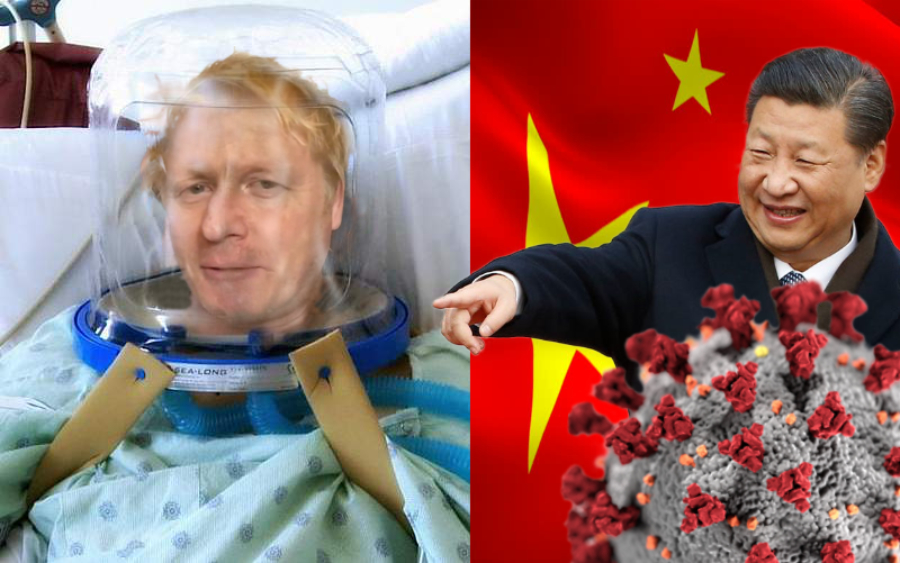 Poor Boris, he has now been put on the oxygen tubes, cut down in his prime by the coronavirus sent from China.

Let us hope he pulls through this utter debacle, a terrible misfortune fallen on someone who is wholly undeserving of such a vile Chinese virus.

One can only imagine the look of glee on the faces of the Chinese politburo chiefs as they watch with tenterhooks the latest news briefs on the condition of the ailing British PM. Could the Chinese have pulled off something many pariah states can only dream of, that is the inadvertent assassination of another world leader utilising a virus sent from China?

There were news reports filtering through of a mysterious disease in China in mid November 2019, but the Chinese communist state shut the news down immediately, even arresting doctors, and anyone else who said anything. It was only when the virus had been raging for three months that the Chinese authorities admitted something was wrong. During this period over 10 million Chinese tourists had been travelling from Wuhan spreading the coronavirus deep into the West. These travellers were positively encouraged by the Chinese authorities to go forth and infect as much of the enemy as possible.

The Chinese authorities knew they could absorb the collateral damage, for them, to lose a million citizens is a mere drop in the ocean, especially when they have an overall population of 1.4 billion.

The West, however, will get hit hard if they lose a sizeable amount of their population, as this will impact on their economy allowing China to seize as much as they can once all the business and enterprise falters.

How things play out in the USA, UK and Europe will determine China’s actions. Their greatest target of course is Donald Trump, who is overweight, refuses to wear a mask, and would most certainly falter if infected with a good enough dose of COVID-19, and also we must not forget the other target the Chinese are hoping to destabilise — the NATO military force. We have already seen some infections in the US Navy.

China’s first port of call will no doubt be Australia, simply because it is within attacking distance, and during this incursion Japan will be on the agenda as well.

China’s economic might however will be the full battering ram that will try to seize as many Western assets once weakened favourably to their advantage. By selling their cheaply made poor quality products to Western consumers for decades, China has built up a vast war chest of money which it uses as a tool for conquest.

The evil of the Chinese regime seems to be lost on the ears and eyes of the UN, who turn a blind eye to this regime’s brutality and savagery. It is China’s corruption and dishonesty that has now led to the globe being tormented by this Chinese Virus. Imagine donating respiratory equipment to China in their hour of need, then China charging Italy quadruple the price for the same ‘donated’ equipment.

If this pandemic is ever over, China should be made into a pariah state, with heavy sanctions and all trade halted.