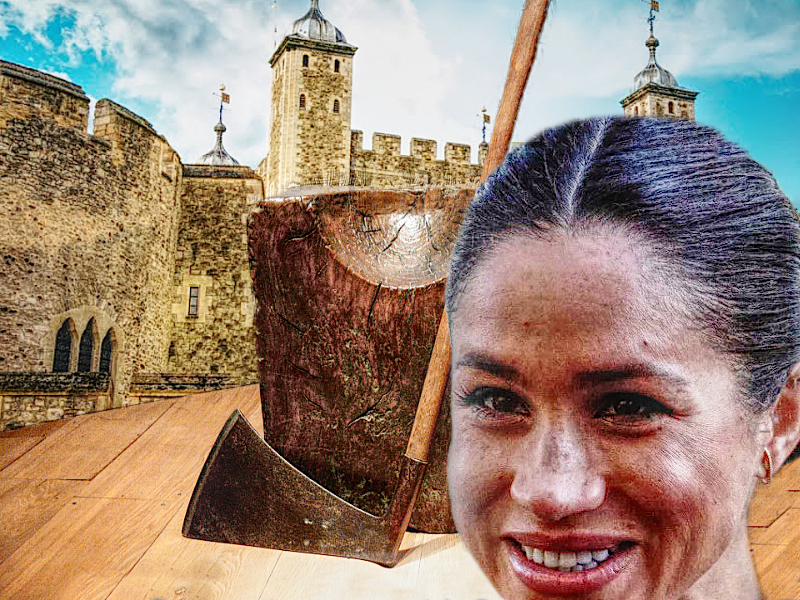 Notched up for a visit to Britain from Canada, Meghan Markle is being eagerly awaited by the Windsor royal family. Meghan thinks she will be doing her own private engagements, however her fate has already been sealed.

The former Duchess of Sussex’s itinerary has already been finalised personally by Her Majesty, Queen Elizabeth II.

Palace aide, Matthew Archibald, has revealed some of the intricate planning for the insufferable duchess’s trip.

“Once the former duchess lands, she will be escorted by a troupe of Beefeaters to the Tower of London from the airport. Meghan Markle will then be held in chains in the Tower for an indefinite period before being paraded in front of the London crowds then beheaded publicly on Tower Hill. Tourists and citizens will be given the opportunity to buy tickets for the event (premium tickets: £34.99), which will also be personally attended by select members of the royal family. The family friendly event will end with a spectacular fireworks display after the beheading.

“Prince Harry will be at the Invictus games with Bon Jovi having a chilled time, so he will not notice what has happened, and will probably be relieved about it when news finally filters through of her demise.

“Afterwards, there will be celebrations in the streets, and the head will be displayed on a pike at Traitor’s Gate until it goes green.”

People on the streets of London cheered at the announcement today, one man who had just trod in a dog shit was especially excited on hearing of the news.

“I just trod in a Meghan, that’s what we call dog shit these days. That is how much she is loved here, especially after what she’s done, and treated us like! Can’t wait to see her head rolling into the basket. That’ll take that awful smirk off her face, once and for all. You don’t treat our Queen like that and get away with it.”

Many Britons will travel far and wide for the wonderful event, some even coming from as far as John O’Groats.