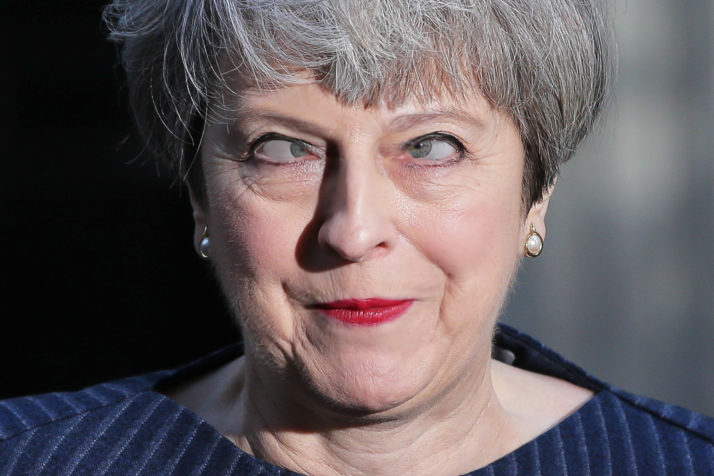 If one were to imagine Theresa May’s bedside cabinet, they would not be surprised in learning the myriad of pharmaceutical drug bottles, and stacks of pills she has laid out all over the place.

Doctors who have examined recent footage of the PM wandering around Brussels red carpets have come to the conclusion that Theresa May is so whacked out on drugs she barely knows where she is or what she is doing.

“If you watch her usual robotic movement, it is now more pronounced and jerky. Her eyes are far gone, the pupils dilated, she has a thousand yard stare and we suspect she is barely functioning as a human being anymore,” Professor Friedrich Hegel, at the Munich Institute of Psychiatry and Mental Health told Euronews.

Westminster insiders know that the PM is suffering from severe depression and needs to be propped up by certain drugs taken every day.

“We’re talking Lorazepam, a benzodiazepine anxiolytic drug that is used for severe anxiety, and the serotonin reuptake inhibitor Sertraline. She is also probably on large doses of Modafinil, a drug used to treat narcolepsy. Add into the mix copious amounts of Adderall, and Methylphenidate, as well as Amisulpride, Clozapine, Paliperidone and Quetiapine, it’s quite a mix. One can imagine she chucks it all into a large jug then downs the lot in one gulp,” a Westminster insider revealed.

The PM is just going from one long meeting to another, she is simply going through a well known routine in autopilot. Her barely functioning robotic body is carried by a brain that is so fucked up it’s a miracle she can get through any sort of political discourse let alone make any crucial decisions that will affect Britain for decades.

“Our country has now been effectively entrusted to a drugged up robotic freak who is an automaton fucked up on copious amounts of prescription pharmaceuticals,” another parliamentarian added.