The report, published in the Population Science Journal, followed trends in every country from 1950 to 2017 and found a rapid decline in fertility that has not been a surprise to scientists.

“If one takes into account that in the West, the high usage of plastics, especially in supermarkets, and in food production, as well as chemicals like Bisphenol A which are put into bottled water and tin cans, as well as the myriad of chemicals put into food, hormones in meat, fertilizers and poisons in fruit/vegetables, Wi-Fi, cell phone radiation, GMO food, and the daily spraying of the skies by specialist aeroplanes, then there is absolutely no surprise that fertility rates have fallen in developed nations,” a scientist commented about the fall in fertility.

Chemtrails are thick chemical laden deposits pumped out by specialist jets which criss-cross the skies spraying the atmosphere.

If one watches chemtrail seeding, the process is very slow as the streams of chemicals keep their linear form for a while then morph into a cloud eventually falling to earth distributing the chemicals far and wide over a large area. 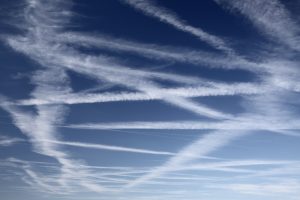 It is not known what composes the chemicals that fall on to the populations and surrounding countryside below, however the statistics of a fall in fertility and vast rises in cancer since the 1950s do give an indication.

There is, as of yet, no official explanation for spraying the skies with thick chemicals which fall onto the earth. One must understand that this spraying has been going on for decades, and is vehemently denied to even exist.

Many people are too engrossed in their mobile phones or their banal lives to even look up into the sky these days, and many are asleep to what is happening around them.

Western nations, and those above government, are killing their populations off with mass-produced shit food, chemicals, and factory farming as well as the societal decline of the family from years of feminism.

In 1950, women were having an average of 4.7 children in their lifetime. The fertility rate all but halved to 2.4 children per woman by last year compared to the fertility rate in Niger, west Africa, is 7.1, but on the Mediterranean island of Cyprus women are having one child, on average.

As developing and third world nations advance their countries economically, they too will be targeted.

The acceleration of infertility, cancer and other illnesses which are a symptom of developed first world nations, will soon encompass the whole globe resulting in an overall reduction in population.