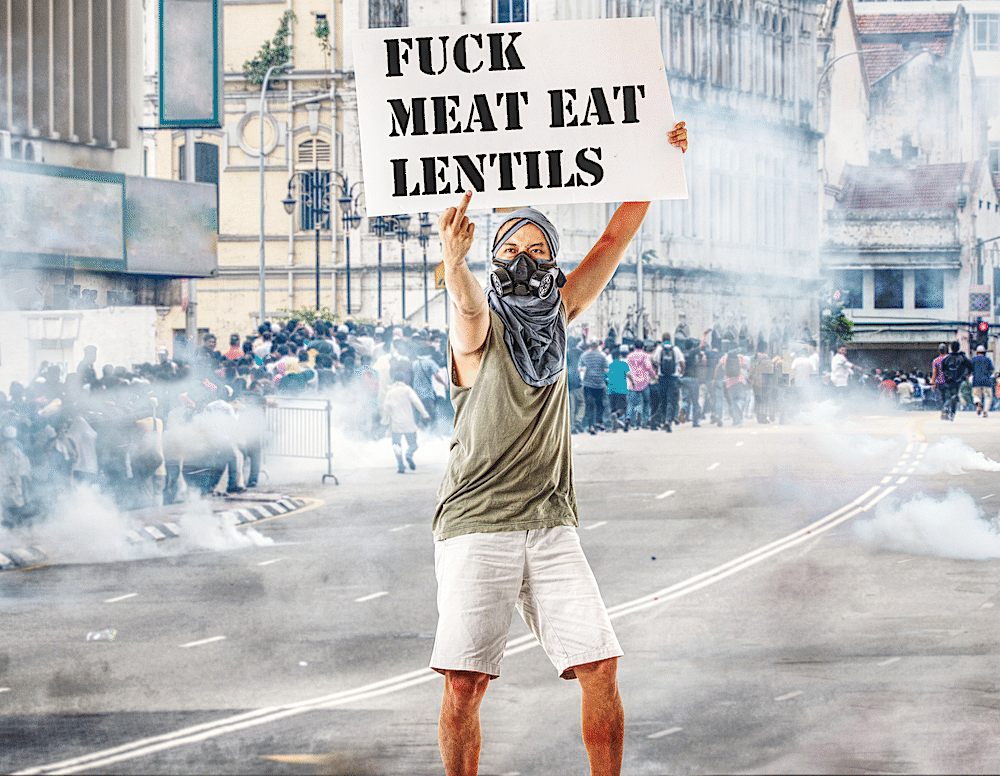 Doxeter, city centre was completely inundated by a mob of violent vegans on Friday, after another butcher shop opened on the High Street.

Police were called out to the scene where vegans rampaged but stood there powerless, and did nothing.

Dean Wotherfoster, 49, a butcher for 20 years was assaulted by a pack of vegans who smothered him with organic hummus, beetroot and lentil tabbouleh, topped off with a smattering of vegan nutroast.

“I was chopping some ribs off a dead cow when in popped these vegans. They started to go red in the face as I chopped away. I thought nothing of it. Then they called me a ‘murderer’ and a ‘killer’ and when I tried to explain that I had not done the killing of the animals, they got even angrier and smothered me with vegan food. I must say, it was rather delicious, as I had skipped lunch.”

One man who was sitting on a bench eating a sausage roll, was dragged by his feet to a vegan restaurant and a vegan sausage roll was stuffed into his mouth forcibly nearly choking him.

Three workers on their break were tucking into their beef burgers when the vegan mob turned up. One unnamed vegan woman took the baps off the burgers then vomited on the meat. She then put the baps back on and forced the men to eat the burgers with vomit on them. They were later stretchered off to a hospital.

By that time, a mob of vegans converged from the east, and bundled into a kebab shop where they screamed at the top of their voices at the staff.

At one shop selling milkshakes, a lactating woman removed her top and proceeded to shout ‘cow milk is extracted from grieving mothers’, she then squirted milk from her breasts into the milkshakes of customers whilst crying at the top of her voice. To her astonishment some customers continued drinking their milkshakes afterwards.

All across the country, many towns were simultaneously attacked in what seems to be a coordinated attack. Message of the day, don’t fuck with vegans.