Anna Soubry protects the EU like the devil’s maiden, Mrs. Baylock protecting the Antichrist Damien in the Omen series of films.

Such is her crazed EU obsessive look and her mad spiky hair that to see her walk down the halls of Westminster, many get out of her way so as not to catch that stare in her demonic EU maddened eyes.

She lives for the EU, and she will certainly die for it too, her glazed over eyes pointing backwards, and the spittle foaming at her mouth.

The devil’s maiden, Anna Soubry, has planted herself somehow into the Conservative party, and within it she wreaks havoc, constantly preaching about how great her satanic masters are in Brussels, and how leaving the curtain of evil in the EU will destroy Britain.

Whenever there’s a parliamentary debate, Anna Soubry suddenly appears out of a hidden door, with a puff of smoke, this demonic feral creature and her furry raspy tongue spits out vitriol against anyone who values Britain’s freedom from the EU. She is against freedom, she is only for the EU and its heaving laws of certain imprisonment. 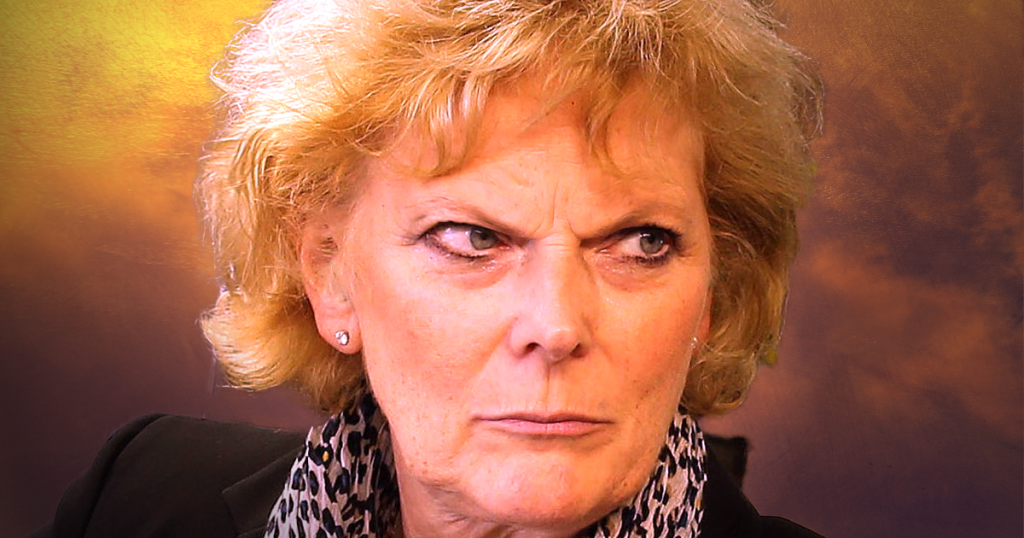 So who is Anna Soubry?

Borne from the puckered popping anus of a jackal in a cemetery somewhere in Lincolnshire, this priestess of the infernal was schooled in the dark arts from an early age, and was once a journalist and TV presenter for Grampian Television North.

She somehow appeared in the Conservative party as a plant from her masters in Brussels and has to this day continued to undermine not only the Tories but the Brexit process at every turn.

This evil, festering boil from the leaking asshole of Hades follows the cult of the EU with such fervour and brainwashed dedication that she has had the EU flags tattooed on her buttocks, as well as a hammer and sickle tattoo on her sagging swaying hag breasts.

Nevertheless, no one knows how she got to Westminster? The only thing they know, as MPs and their staff mill around the hallways and offices, is that if she is heard coming, hide, jump, run, get away with you, do not look into her devil eyes, or you too could succumb to her satanic demonic ways as well and forever be damned to Hell.