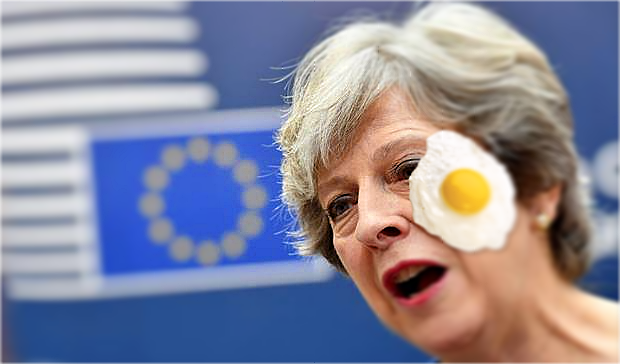 The ever trusting Theresa May has once again been shat on by the EU bureaucrats, and as she slinks her way back to Number 10, one can only feel sad for this pitiful trusting creature who had such a vision of pleasing everybody, but she still has not realised that one as a politician can never achieve that utopian ideology.

No doubt, this sad floundering woman will put on a brave face for everyone whilst crying a soliloquy of utter despair in her wretched barren heart.

One could obviously give this woman some advice such as ‘walk away’ or ‘let’s deal with the WTO’ and ‘fuck the EU’ but that solid advice would no doubt fall on deaf ears.

Whatever happens, the EU arse holes will always stick their nasty exit bill under the UK’s nose, for that is all they care about, punishing the UK, as we won the war, therefore we should be punished, like some sort of war reparation.

The sickness of the Soviet EU is such that the stench reaches us over the Channel daily with every awful news report, and it will go on and on, ad infinitum until Theresa May, the weak link will pay Brussels their blackmail ransom money.

The worst part of this putrid affair, is that if Britain had someone at the helm with some fucking balls, we would have been well on the way by now steaming across the sea and forging new trade deals where countries are literally begging for us to trade. Instead, we have this insipid pathetic woman who is probably a very nice person in real life, but is just not up to the savage job of dealing with the ruthless liars, thieves and corrupt unelected officials of the EU.