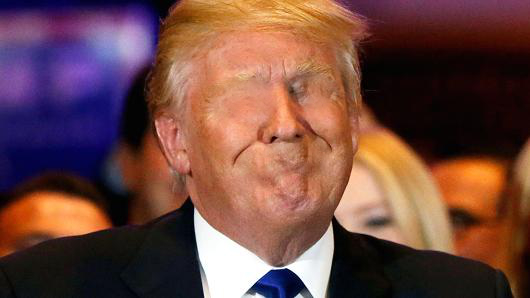 “It’s like I’m invisible. This is why I have to tweet every few minutes to show people I am around. When I am on screen maybe they don’t see or hear me,” the Donald said, with tears streaming down his face.

What about the goddamn Russians? They seem to have been a thorn in the side of the Don since the beginning of the election campaign.

“Talking to Russians ain’t a bad thing. I talk to people from all over. Like I talk with those people from Africa, I talk to Israel, and I talk to North Korea, does not mean a thing. These Libtards got it against me at every turn and want an excuse to impeach me,” Trump added.

The president records every conversation that occurs in the White House, and do does the FBI, who seem to have the Donald firmly in their sights.

“Let’s see, I fire that kook Comey, now he goes crying to the dems, and they continue their little investigation. Last I heard, I was the president, the fucking king, I order these people not the other way round!” a thumping fist on the Oval room table resounds.

Something has to be done by the Don sharpish or he really will end up on the wrong end of the stick.

Back when he was first announced as the winner of the election, the Squib advised the Don to clean house, like fire all the socialist whining Obamamites embedded in the FBI, CIA ,IRS, DoD, etc, etc.. That is the only way the Don is going to survive a presidency. Don’t speak to any press that is under the leftwing bias, don’t fucking tweet any more. You are the president, you are meant to be elusive, decisive and very secretive. By tweeting your every brain fart, you not only give away your every intention to your enemies but you add fuel to the fire and obstruct the workings of your team.

If you don’t listen to the Squib Donald, who the fuck are you going to trust?

Remember Drain the swamp, Build the wall, Throw out the illegals, Ban the Muslims, and let’s have a war for a change. Yes, a good ol’ shoot out with some terrorist loving country, and we’re not talking a civil war, we’re talking either Syria or N.Korea. Listen to Henry, he comes around, talks to you in the office, listen to him and take his advice.