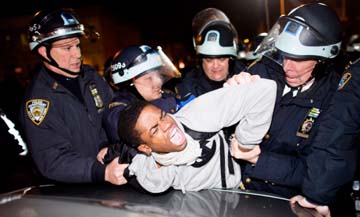 With every successive police shooting of African Americans by local state forces, the rioting by provocateur led groups inciting angry Africans to cause millions of dollars of property damage is a key point within law enforcement unity in creating a singular Federal police force controlled solely by Washington D.C.

What the African Americans who are committing these violent crimes do not know is that their so-called protests for ‘equality’ are just a front for the formation of a Federal Police Force encompassing the whole of the United States under the sole control of the president.

By incorporating a singular U.S. police force under one control centre, all states would achieve policing within a single framework of practice. This homogeneity would thus reduce any differences in state to state policing and prove more effective in population control.

We must address the divergent instances of rioting by easily led African Americans who have played the game very well, and we must also address the unitary action of the higher command of police forces to unite under a singular federal force to police the entire United States.

The Black Lives Matter group, funded by those wishing to introduce the Federal Police Force are instrumental in creating violence, looting, riots and should be applauded fully for their role in unknowingly being used for this purpose.

Implementing a Federal police force will be easy, as the population and local states will be fed up of the riots giving the newly formed police force an opportunity to achieve its goals.

Our greatest thanks to the BLM group and other easily manipulated groups for your hard work in creating a Federal Police Force which will be completed very shortly.

Just a little note of caution to all African Americans and groups like BLM, once the Federal Police Agency is created, you will not be needed any more and you will be crushed if you try to riot again. There will be no need for your services after we have achieved our planned goal.