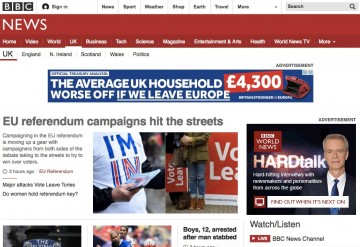 When the BBC was first founded on 1 January 1927 it held the mantle of impartiality within its basic framework. Those days are long gone.

Everything about the BBC during the EU referendum campaign is directly in favour and skewed towards the Remain campaign, and it is getting so ridiculous that many people are simply turning off.

With 90% of coverage given to the StrongerIn campaign, there is little or no coverage of any other voices. You don’t see Michael Gove, you don’t see Boris Johnson or Iain Duncan Smith, and you certainly don’t see Nigel Farage.

The BBC’s impartiality statement is:

“Impartiality lies at the heart of public service and is the core of the BBC’s commitment to its audiences.  It applies to all our output and services – television, radio, online, and in our international services and commercial magazines.” 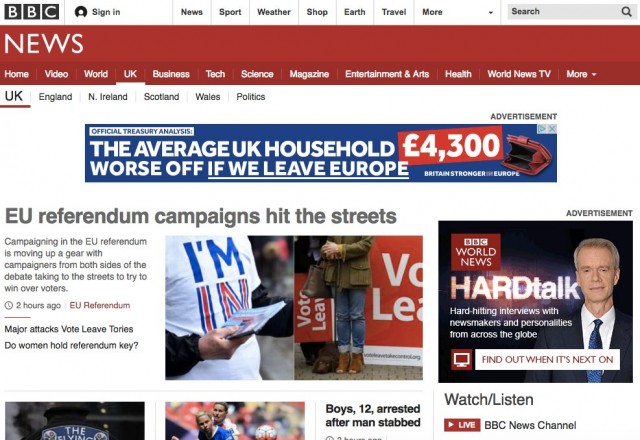 Are we now living in North Korea or the former Soviet Union, as the BBC adopts a complete Eurocentric biased ethos, disseminating EU propaganda at every turn, and ignoring the other side completely? It is not the British Broadcasting Company any more but the Euro Broadcasting Company.

One can only hope that there is a Brexit, purely to bring some impartiality back to the BBC one day. We are now seeing some kind of independent oversight committee being assembled to watch over the errant corporation, however no one really knows what or who will be manning that operation. Could just be another white wash like so many other Cameron government escapades, all show, no action.

Amongst the thousands of publicly funded civil servants ordered to work for StrongerIn, yes, it is only natural that the BBC was enrolled into the campaign, especially after receiving £2 million from the EU just prior to the referendum was announced.

Well done BBC, although you were once impartial, you are just now a tool for indoctrination. You are no different to the Politburo or Stasi.