The European Union is creating a state of permanent internal conflict and war by enabling a system wherein the indigenous population of nations are replaced by others who hold completely opposing cultural practices and beliefs.

This dangerous process creates a climate of perpetual never ending fear, conflict, hatred and ultimately leads to constant civil unrest eventually leading to all out war.

Sanctioned appropriation of a whole population by another invading force creates an atmosphere of resentment, and maybe this is what the EU is seeking to do. They are seeking to destabilise communities that have flourished for thousands of years in harmony, and to destabilise these communities, have their employment, livelihoods vanquished, and their place of abode threatened.

Mass unfettered migration is an EU weapon delivered quickly, utilised as a technique to eviscerate nation states, to harm social structures and local culture, to kill off the family unit, to effectively intensify the state of war internally and globally.

Under Tony Blair’s premiership the doors were opened wide, and David Cameron, despite false promises opened the doors even wider.

Merkel today blames the British people for instability in the Continent, however it is her mass migration policy which is causing instability.

Controlled migration is the antithesis to what we have now. Within nation states, an orderly controlled form of migration is a good thing. We want to encourage skilled people into the UK who have something to contribute, and a slow controlled migratory policy is a sensible economic policy. This can only be achieved by leaving the EU.

If the levels and speed of migration continue at this pace into the UK, there will be social unrest leading to certain civil war. Maybe this is what the EU wants. After all, the EU, which is led by Germany lost two wars against Britain, and this is one way of destroying their nemesis once and for all.

If the UK remains within the EU after the referendum, there will be a mass exodus of people away from the country of their birth. The brain drain will certainly affect industry and institutions because the unskilled will not be able to replace these people. 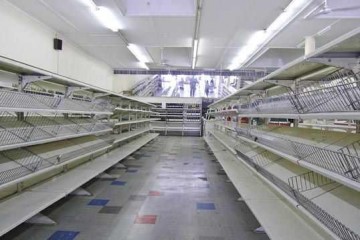 Eventually within two or three years, there will be unrest in the streets. Mass looting and violence will spread like wildfire across the country, and the UK would see civil war erupting as the clash of cultures fight it out. Britain will have been emasculated by remaining in the EU but there will be fighting in the streets to try to regain some semblance of normality.

In the chaos, no shops will be open, and the electricity and water may be disrupted in most cities across the UK. When people are desperate for food, thirsty, without hope, they do things they never thought they could do. On a tiny island like Britain, we could see carnage, and gangs marauding, looking for spoils as the army and police are on standby.

The augurs do not bode well if Britain remains within a totalitarian undemocratic regime such as the EU, especially within a state that is willing to sacrifice its own people for their evil utopian super state dream.