‘These warnings lack credibility given that Mr O’Leary said the complete opposite just a few months ago.

‘George Osborne appeared today alongside one man who thinks that the EU is an evil empire and another who said that the Chancellor does not understand economics.

‘George Osborne is panicking about his failing campaign so he is resorting to ever more lurid scare stories. His problem is that he’s told so many tall tales that people no longer believe what he and David Cameron say on the EU any more.’

Here are the FACTS

The Chief Executive of Ryanair has previously been highly critical of the EU and admitted air fares would not rise if we take back control.

Michael O’Leary of Ryanair has previously been very critical of the EU, which he has called an ‘evil empire‘:

‘You work in the Commission and pay higher prices by law because, let’s face it, the European taxpayer is going to pay for it anyway. The European Union spends most of its time either suing me, torturing me, criticising me or condemning me for lowering the cost of air travel all over Europe and making life really difficult for their favourite airlines… Any hint of innovation is left at the door when you walk in to become politicians and bureaucrats…. It’s certainly not going to be a conference held in Brussels, where the last innovative idea came in 1922’.

O’Leary previously said that ‘Will a Brexit on its own cause air fares to rise? No‘. His current warnings therefore are simply not credible.

The Head of British Airways has said airfares will not go up if we Vote Leave and that British airlines will still be able to fly between countries within the EU.

The head of British Airways’ parent company, Willie Walsh, has made clear he does not foresee leaving the EU as ‘having any impact on our business’. 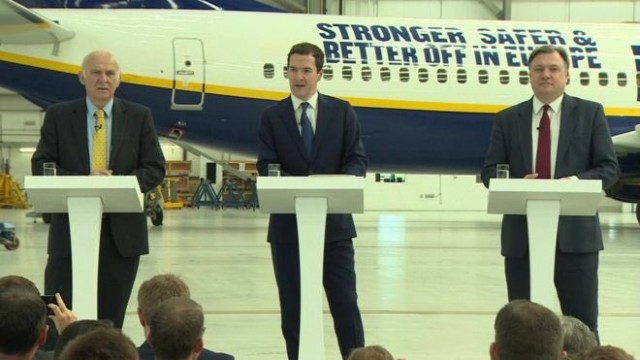 There are serious questions about the aircraft that has been painted with the Britain Stronger in Europe (BSE) campaign’s slogan, ‘stronger safer & better off in Europe’ (sic).

Ryanair has not registered as a ‘permitted participant‘ with the Electoral Commission.

This means it is unlawful for Ryanair to incur more than £10,000 on ‘Advertising of any nature (whatever the medium used)’, ‘The provision of any services or facilities in connection with press conferences or other dealings with the media’, and ‘Rallies and other events, including public meetings… organised so as to obtain publicity in connection with a referendum campaign or for other purposes connected with a referendum campaign‘.

Estimates of the cost of painting an aircraft are over $50,000. Ryanair is thus acting in an illegal and unlawful manner during this current EU referendum contravening the law.

In December 2011, the European Court upheld a Directive which allowed the EU to regulate aircraft registered in third countries while they were in transit in international airspace.

These attempts to extend the EU’s jurisdiction extraterritorially could place airlines under conflicting regulatory obligations and are liable to undermine international cooperation.

The Association of European Airlines has suggested that the EU’s policies could cause ‘a trade conflict between the EU and third countries’.

The Chancellor’s claim that trade would fall by £200 billion in the event of a vote to leave are contradicted by the Prime Minister who dismissed such warnings as ‘scaremongering’.

The UK’s former Ambassador to the EU and leading supporter of the BSE campaign, Lord Kerr of Kinlochard, has admitted: ‘there is no doubt that the UK could secure a free trade agreement with the EU. That is not an issue‘.

The pro-EU Centre for European Reform has accepted that, ‘given the importance of the UK market to the eurozone, the UK would probably have little difficulty in negotiating an FTA’.

Being in the EU means that we have lost control of our air transport policy.

Being in the EU means that the UK has lost control of air transport. Under the EU Treaties, the EU institutions have the power to make laws on air transport. The UK does not have a veto. A vote to leave will make the UK a more influential voice for international cooperation, since we will regain our right of veto.

The EU is increasingly attempting to supersede the UK’s voice in the International Civil Aviation Organization (ICAO). The Commission argues that ‘a more co-ordinated EU external aviation policy is the logical consequence of the EU internal market and associated common rules’. Since aviation policy is an EU competence, the EU can force the UK to adopt common EU positions in the ICAO. The safer option is to Vote Leave and to take back control of aviation policy.

Those campaigning on the same platform today have previously said they cannot be trusted on the economy. We should not listen to their advice now.

Ed Balls has previously said the Chancellor of the Exchequer’s economic policies are ‘irresponsible, and dangerous‘.

Osborne has said ‘for the last decade in the good years, Germany fixed the roof when the sun was shining and he [the Shadow Chancellor, Ed Balls] did not when he was in government’ (ITV News, 17 May 2012, link).

Vince Cable has said the Chancellor is ‘extremely cynical’, and that he ‘didn’t really engage with economic stuff – he took that from the Treasury. The economy turned out alright, but I don’t think that was because of him‘.

Vince Cable has also condemned George Osborne’s austerity agenda, talking about the need to protect ‘the things you will take a cleaver to’.

Ed Balls has previously said of Vince Cable that: ‘The business secretary knew this plan would fail. He now knows he is deeply implicated in the failure, but he doesn’t have the courage to stand up and say it. No wonder in yesterday’s Budget he was ignored. It is a personal tragedy as well as a national tragedy’.