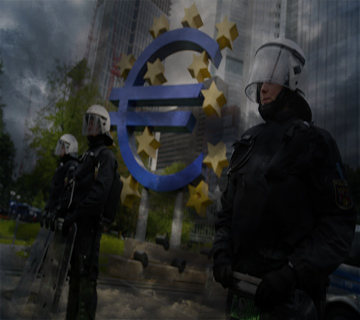 There are still pockets of resistance fighters across the continent but every day more and more are discovered, flushed out and liquidated.

Internal body implants became mandatory in 2023, and replaced mobile phones as a means of tracking your every move, your every thought and your every word. Internal body implantation biometric devices are also used for every transaction, tracked and monitored. There is no more cash, and anyone found using other forms of currency are punished severely. The EU can also turn off your digital currency at any time to punish a person for any indiscretion against EU law.

Dissent is punished with imprisonment in a re-education camp, as prescribed by EU diktats, all must obey fully to the state now being led solely by Germany.

In 2020, the EU’s capital was moved from Brussels to Hamburg, to reinforce the EU’s Germanic supremacy.

Education begins in the womb, as EU edicts are programmed into foetuses before birth. Microchip brain implant technology introduced in 2028. Without the required programming, a birth licence is not granted, and the baby and mother are both terminated.

Undesirables are rounded up every day, those who have broken the law in any way, those who resist and those who have harboured thoughts deemed subversive by the authorities. The ones who can be reprogrammed to love the EU are spared, but those who still resist are taken to special chambers where their bodies are liquefied, and then fed into the water and food nourishment system to be consumed by the masses as a form of protein.

Britain lost their bid for freedom in 2016. Since then the former country’s population has risen to 180 million people by forced EU repatriation and migration. There were many riots, and it came close to civil war but mandatory implants soon quashed all resistance as well as harsh punitive measures by the EU authorities overseeing the transition.

The many absorbed nations under the EU are all now bound by one singular EU army, which is compulsory to join. The Russian threat is cited as the reason for full compulsory conscription and skirmishes in the Ukraine sector resulted in Russia moving into Finland in 2021. Sweden reported Russian Federation troops entering their borders in 2023.

To escape this EU totalitarian Soviet Islamo-Fascistic nightmare is now a missed opportunity for many. In 2024 thousands were able to flee through Sicily into Libya and then onto Africa, but many were cut down before they could escape the EU.

In the British sector, there have been many riots, quelled by the militarised EU police, the influx of millions into the EU over the years, has left wages at rock bottom, the EU wide welfare system established in 2019 resulted in benefit cuts of over 75% because of the mass of welfare recipients. Hospitals also received huge cuts in funds, and even though nanotechnological medicine was introduced in 2025, this was only available to the elite and EU politburo.

The EU introduced a directive in 2026 banning all private property and land ownership, this law created a backlash from many who were then detained and terminated. Some estimate that over 400,000 EU citizens were culled in one month.

Food shortages due to mass migration from Sub Saharan Africa and the Middle East into the EU over decades resulted in EU citizens being fed on a GM produced porridge substance with the only protein derived from liquefied human cadavers. The protein is sufficient to keep many alive, as there is no room for crop growth any more, or to hold livestock. The EU tries to keep the source of the protein fed to the masses quiet but in 2027 a leaked dossier results in more mass riots, only quelled by EU military forces.

By 2030, the EU’s population has risen to 4.6 billion people. There is no European utopia but instead a dystopian nightmare so horrible that many choose death willingly than exist in the EU. But, hey, at least the EU food supply is safe as millions who resist are dealt with appropriately.