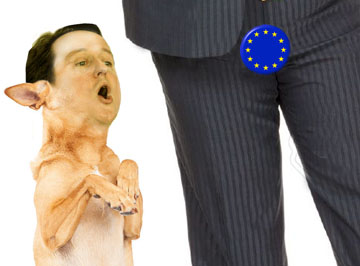 “EU deal? I say this, but it’s something else, sell it to the people, the EU say otherwise, EU changes the temporary contract at whim, Tories lose election, Labour gets in, zero hour EU contract changes again with no notice, back to square one, EU wins.” a jubilant joyous PM revealed after touching down at Heathrow from Brussels.

He’s done it, the illustrious David Cameron has produced a list of minuscule things that could be done but will never be implemented by the erroneous ‘EU deal’ that’s not really a deal.

“Today is a historic day in our country’s history. I have brokered an EU deal that can easily be adjusted by the EU and is not legally bound by any court. I have secured Britain’s future at the bottom of the barrel to be easily manipulated, exploited and basically molested by multiple aggressors on a daily basis. Thank you and goodnight,” David Cameron said before retiring for a good night’s nightmare or two.

The streets were lined with bin liners all the way back to Downing Street, and a single raven flew across the darkened sky cawing ominously.