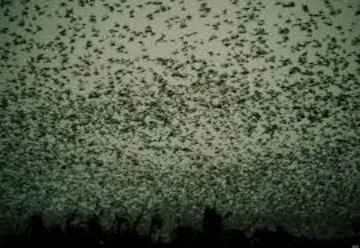 “Consider this mein Britisher friends. If you leaffe you vill see locusts as big as birds flying in their millions over your crops and your stupid little countryside,” Gunther Clossfein, an unelected EU official revealed smiling awkwardly.

The Romanian Foreign Minister, Laszlo Pikpokt, also assured destruction on Britain if it dared stop the benefits bonanza his countrymen are benefiting from so greatly.

“The locusts will be more numerous than Romanians streaming across your borders daily. You will never see a blade of grass ever again if you do Brexit and stop the gravy train. Big Issue! Big Issue!”

The French, however were rather sanguine about all the threats but still chose to add one any way.

“Merde. Vous rosbifs do not get it do you? If you vote Brexit half of France rich people will move to Britain as well as other rich people from EU countries for haven. Do not do it mes enemies. Ah, we do not like rich people any way!”