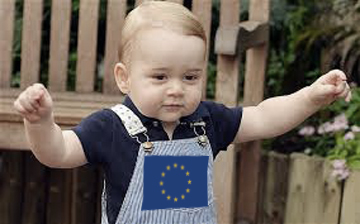 Prince George has proved once again how much of a style icon he is after a £485 outfit he wore to his dad’s recent EU speech sold out today.

“I think it’s meant to be making some sort of subtle statement, but I can’t quite put my finger on it,” royal commentator, Barnabas Ballentyne, told ITV news.

The Duke and Duchess of Cambridge were on hand to lead the toddler out onto the stage where his new outfit was photographed at least 20,000 times by whole teams of photographers.

There was even approval from across the Channel, where Jean Claude Juncker reluctantly interrupted a date with another jug of cognac to applaud the choice of attire.