George Bush today led world leaders urging Cuba to use Fidel
Castro’s resignation as an opportunity to move the country towards
democracy.

Speaking on a visit to Guantanamo Bay’s Camp X-Ray, the American torture facility, Bush, the tenth US
president since the veteran communist ruler gained power in 1959, said:
“Like America which is a society built on freedom and justice, Fidel Castro ought to begin a period of a
democratic transition.”

“My administration of torturers and war criminals will work
with the Cuban people to begin to build institutions that are necessary
for democracy,” he said standing in the main torture chamber amongst screaming men with electrodes attached to their testicles.

“Eventually this transition ought to
lead to free and fair elections – and I mean free, and I mean fair – like how I was voted in twice using Diebold voting machines and other illegal methods.

“And we’re going to help. The United States will help the people of Cuba realise the blessings of liberty and fair justice.” 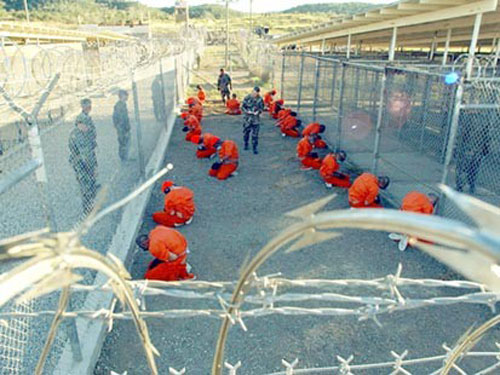 The USA has been
able to contravene the Geneva Convention at Guantanamo Bay and refuses
to acknowledge that detainees have any rights for a fair trial in any
court of law in any jurisdiction since 2002.Anyone can be taken from anywhere in the world and put in the prison at ‘Gitmo’ and never be heard from again.

Dubbed ‘the gulag of our times’, the detention camp is a place where people disappear with no trace.

America has shown the world the benefits of freedom and justice with the
detention camp at Guantanamo Bay Cuba where detainees are not tried in
any court of law, are not heard of ever again and are tortured daily.