“Comrades, Red Army and Red Navy men, commanders and
political instructors, men and women workers, men and women
collective farmers, intellectuals, brothers and sisters in
the enemy rear who have temporarily fallen under the yoke of
the capitalist brigands, our glorious men and women guerrillas
who are disrupting the rear of the bourgeois invaders!

“On behalf of the British Government and our Bolshevik
Labour Party I greet you and congratulate you on the
anniversary of the great Socialist Revolution Vision of Change.

“Comrades, I have instructed Comrade Darling to create a Peoples Bank for the Proletariat of Britain. Every worker and citizen will have the honour of being part of the nations large debt mountain.

“Every worker will shoulder the burden of our workers struggle. I have put aside £110 billion for now to be paid by every worker in our great nation – a mere £4000 of debt for each citizen to enjoy. Work hard my brothers and sisters – in the next 100 years you may one day pay off the debt.” 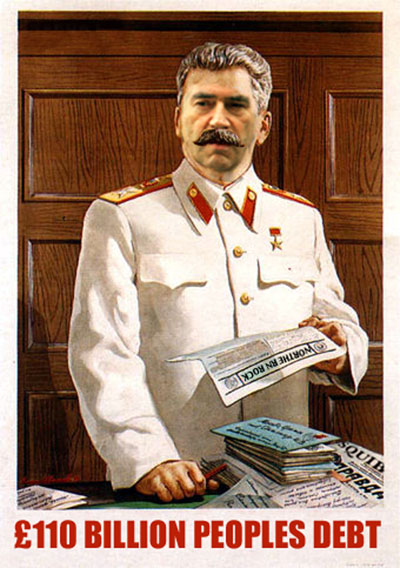 The immense debt which has been gifted to the people of Britain is equivalent to the entire budget of the NHS or 30 pence on income tax. Workers from all over Britain will be increasing production in the factories from tomorrow to pay for our wonderful burden to the party.

Proles and workers who heard of the news were delighted to carry on the workers struggle and celebrated by shouting out the name of our glorious leader Comrade Brown in Politburo Square all of yesterday.

After the singing and dancing ended some shareholders from the bourgeois capitalist previous incarnation of the old system Northern Rock were publicly hanged by their necks to rambunctious cheers from all present.